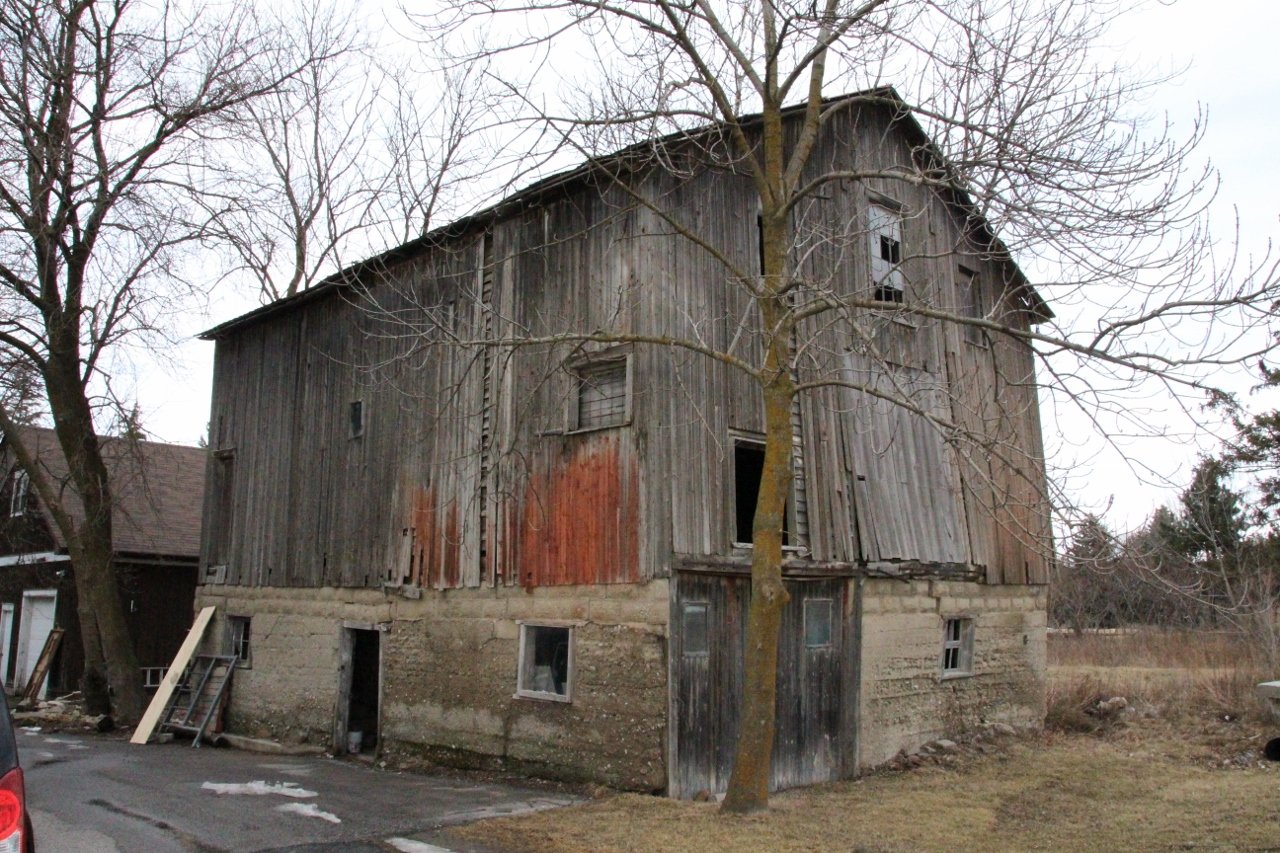 An old barn near the corner of Kennedy Road and Elgin Mills Road East is not just another barn – it is a structure that once played an important role as a meeting place in the crossroads community of Cashel. The barn is associated with the building most people know as the Cashel Roadhouse, a substantial brick inn that was built circa 1858 to serve travellers on the Markham and Elgin Mills Plank Road, a toll road that was the Highway 407 of its day. The modern-day address is 4510 Elgin Mills Road East. In recent memory, an antique store was located here, but for some time the old inn has been a private residence in the countryside area of Markham.

The barn was constructed as a driveshed to stable the horses and house the wagons, carriages and sleighs of travellers and other patrons. It was likely built about the same time as the inn. Upstairs, as with many hotel drivesheds of the day, there was a meeting hall serving a variety of community purposes, like musical performances, political meetings and a place for travelling salespeople to show and sell their wares. In this case, however, the upstairs of the driveshed also contained a private lodge room for the Freemasons, a fraternal group prevalent in the nineteenth century in Britain, Canada and the U.S.,and still active today.

The Richardson Masonic Lodge of Markham-Stouffville began its long history on the upper floor of this time-worn old structure.  The first meeting of the lodge was held on June 15, 1860, when Samuel Mighton was the innkeeper at Cashel and James Bowman was the Worshipful Master or leader of the lodge. Samuel Mighton was the first initiated candidate. The next year, he moved to Scarborough Township to serve as an innkeeper there. His departure may have been a motivating factor in the relocation of the lodge only a few years after its establishment, if subsequent innkeepers were not members.  In 1866, the Richardson Lodge relocated to Knill’s Hall in Stouffville. In 2010, it celebrated its 150th anniversary.

The three windows in the street-facing gable end wall are a clue to the extraordinary history of the barn being more than just a simple barn. The interior is constructed of heavy timber framing typical of this type of building in the mid-nineteenth century. At a later date, the old frame building was lifted and placed on a foundation of poured concrete to provide more storage space.  Traces of the former lodge room have disappeared in renovations over the years. Most halls of this type would have had lath and plaster walls and ceilings.

This historic site is showing its age and it is uncertain how long it will stand, but its connection to the early history of the Richardson Masonic Lodge is commemorated in a piece of the old, original structure that was donated by the present owner to the current meeting place in Stouffville when the 150th anniversary was celebrated.