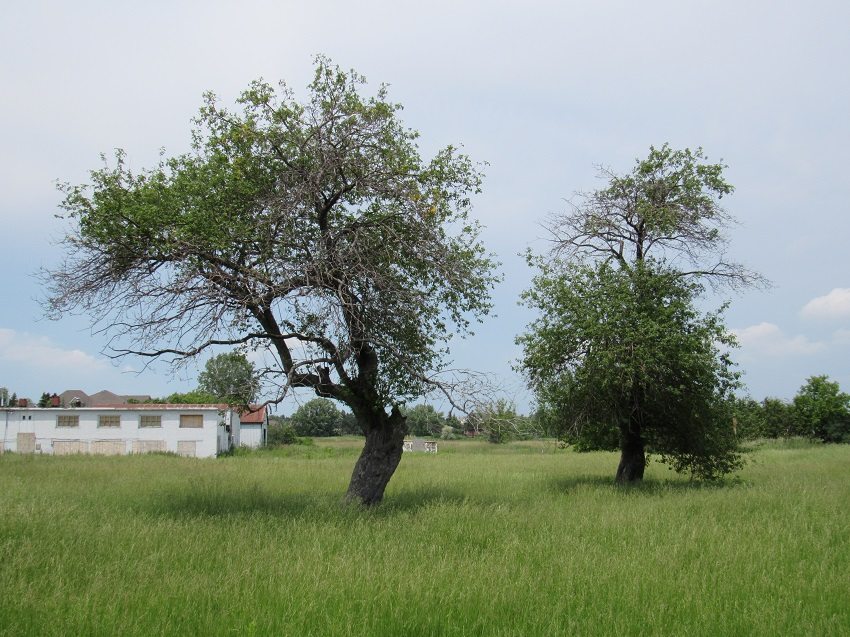 The landscape is always changing. Forests turn to farms, farms turn to suburbs, and suburbs become cities. Change can be drastic and complete, like when open land is built over with a large commercial development, and all traces of the past are erased. Other times, change occurs gradually, removing features of the landscape piece by piece until a place is utterly transformed.

A pair of old apple trees on the north side of Highway 7, a little east of Warden Avenue, are part of a rural landscape that has been slowly transitioning for a number of years. These trees stand out as something special, something very old and out of place among the more recent bungalows, shopping centre, church and condominium residences.

The apple trees stand on a township lot that was originally a Crown reserve. The government of Upper Canada, as Ontario was once known, transferred ownership of numerous reserve lots to King’s College to provide the university with a means of financial support. Today we know King’s College as the University of Toronto. Lot 11, in the 5th Concession of Markham Township, was sold in two parts. The eastern 100 acres were purchased by William Eckardt and became the south west residential neighbourhood of the village of Unionville. The western 100 acres were purchased by Peter Hemmingway in 1853.

Peter Hemmingway was a member of a family of English descent that first settled in the state of New York before later generations moved to Canada. Josiah Hemmingway came to Markham in the early 1800s, where he purchased land in the south central part of the township. He married Annie Stiver, a daughter of one of the Berczy settlers and thus became integrated into the Unionville community where so many of William Berczy’s German families lived.

Josiah and Annie Hemmingway had four sons, Moses, Benjamin, John, and Peter. Peter Hemmingway was a farmer and lived with his wife, Barbara Fierheller and their four children in a log house on the family homestead. The Hemmingways may never have actually lived on the property they purchased west of Unionville but instead rented it to other farming families. Not much is known about them. Historical research is like that sometimes.

The Hemmingway farm was sold out of the family in 1871. The westernmost half went to Irish immigrant Matthew Allen, and the easternmost half, where the apple trees stand today, was sold to George Amos. George Amos was the son of a local store-keeper, farmer and leather tanner, Thomas Amos. The Amos family, like the Hemmingways, were of English origin. They lived in the crossroads hamlet of Brown’s Corners, today the intersection of Highway 7 and Woodbine Avenue.

George Amos and his wife, Nancy White, established a farmstead on the former Hemmingway property. A map in the Historical Atlas of York County, 1878, tells us that there was a farmhouse in this location, with an orchard nearby. The two old apple trees seen today are remnants of that orchard.

In 1884, George and Nancy Amos sold the small farm to Martha Allen. Members of the Allen family were already living there when the census was taken in 1881. In fact, there were three separate Allen family households on the west half of this township lot at that time.

Time has removed all of the farmhouses that the Allen family once called home. At some point in the mid-20th century, the farmhouse that stood to the east of the apple trees was demolished and replaced by a modest bungalow on a large suburban lot. There used to be three of these trees here until recent times, When the last ones go, there will be no tangible traces of the past to remind us of the stories of the farming families that once owned the land but left little more than census records for historians to remember them by.

Photo: These old apple trees are remnants of a farm orchard planted in the 1870s. Soon they will disappear as development changes the land from rural to urban.