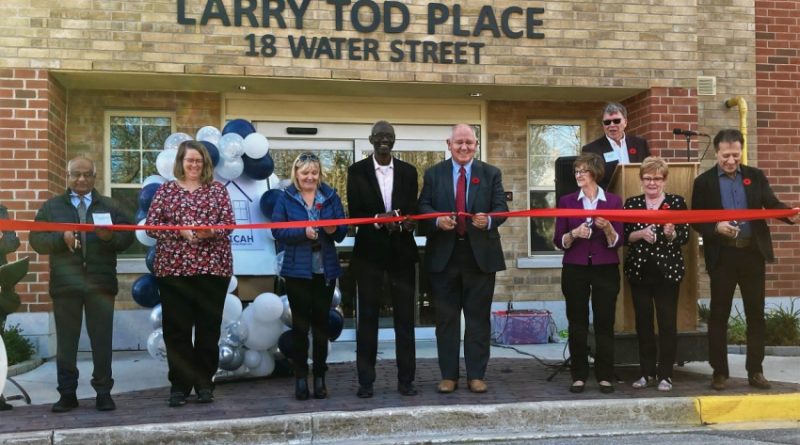 The official opening of Larry Tod Place on Water Street in Markham Village Nov.10 marked the completion of the fourth affordable housing endeavour by the Markham Inter-Church Committee for Affordable Housing (MICAH), with more on the horizon.

“We would have normally had a groundbreaking ceremony, but some small virus got in the way of our plans,” quipped Mike Clare, president of MICAH.

With access to affordable housing an ongoing challenge in communities throughout the province, Larry Tod Place is a welcome and much-needed addition.

“Our waitlist for housing is growing, and it’s more important than ever that purpose-built rental becomes a focus and a priority. Everyone deserves to have a warm and safe place to call home,” said Ward 4 Councillor Karen Rea.

“I think it’s a great, great combination to allow seniors to have access to youth in our community – youth that they can mentor. I think it’s a wonderful opportunity for mentorship, but it’s also about learning from each other,” said Markham Mayor Frank Scarpitti, adding, “there’s a lot that youth can teach the seniors within this community as well.”

MICAH was established in 1988 as a non-profit corporation to address the need for affordable housing for low-income Markham residents. Larry Tod Place is the most recent of MICAH’s four affordable housing endeavours, with Cedarcrest Manor, Robinson Street Mews, and Tony Wong Place being the others.

The organization confirms that it has created over 330 living spaces and housed over 6000 individuals and families.

Tod was president of Cedarcrest Manor when he envisioned giving some of its underutilized parking space a “higher purpose” and proposed the construction of what is now Larry Tod Place. Sadly, Tod passed away in 2018 after the project got underway.

“Because he passed and was not able to take full advantage of being a part of this, we wanted to recognize him by naming the property the Larry Tod Place,” said Stephenson.

Like any project of such a substantial scope, Clare admits there were “hiccups” along the way, including a need to switch building contractors part-way through the project.

“Our community is very fortunate to have people like Mike (Clare) and his board of directors that work at this – and it is a lot of work,” Scarpitti said. “Thank you for your dogged determination to get this done because I think without it, other groups would have given up at the first sign of those major issues that you faced very early on.”

Clare credited a “solid team” in bringing Larry Tod Place to life and acknowledged the contribution of many individuals and organizations during the ceremony, including Cedarcrest Manor, Housing York, City of Markham staff, Ward 4 Councillor Karen Rea, TRP Construction, MICAH Board members and volunteers, and Larry Tod himself. He also acknowledged all levels of government – regional, provincial, and federal – in supporting the project.

According to Clare, the estimated build cost was about $15 million, but the final bill came in at about $13.5 million. The savings resulted from the contributions of the many MICAH volunteers who dedicated time and energy to the project.

He also thanked the Larry Tod Place tenants who, as he explained, were the ones to take the building on a “test drive” and had to contend with some of the issues that can come with a new building, such as temperature regulation.