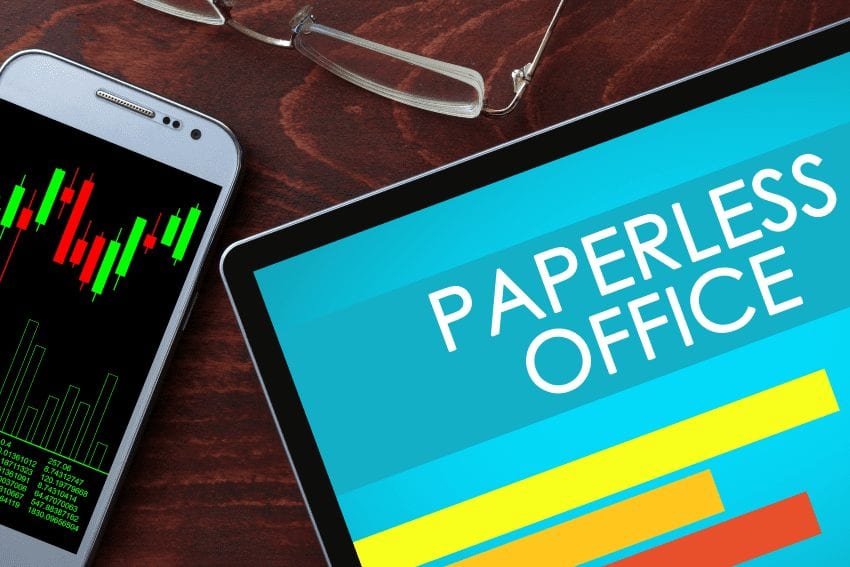 From tap debit cards to Apple Pay and e-transfers to direct withdrawals, cash is playing less and less of a role in commerce today.

One Markham business is looking to do the same thing with paper.

After a two-year long migration process, Unionville Heating and Air Conditioning has gone completely paperless—an effort spurned by a desire to reduce both the company’s carbon footprint and operating costs.

Now in its 32nd year, the award-winning residential heating and air conditioning installation and service company has eliminated its paper trail not only for invoices and purchase orders—but even promotional materials like brochures and business cards.

For the majority of the company’s 14,000 customers, dealings—including quotes, invoices and receipts—are electronic.

“It’s either you keep up to the crowd or you fall behind,” St. Germain said. “It’s one or the other. At the end of the day, everybody else is moving forward. Times are changing, and where people pick up the telephone and make phone calls these days to say ‘Hi, how are you?’—those days are gone. They’re texting now, and sending emails.”

The company tested out an automated phone system, but scrapped the service last month on account of it being too impersonal.

It was one of a few missteps along the way for the company that decided to undertake this evolution on its own.

St. Germain—who, ironically, describes himself as “old school” with technology—and his team decided to keep the process organic rather than hiring a consultant.

Though “a few mistakes” were made, he said that the cost savings—and final product—make it worthwhile.

“The whole idea behind going electronic and putting everybody on computer systems or tablets is to reduce our costs so that we can keep that reduction and pass it on down to our consumers,” he said. “We try to do our best to save the customer some money and stay in business.”

One major phase of the process was the closure, and subsequent decentralization, of the company’s Unionville office, spurned by a spike in rent costs when a new landlord took ownership of the office’s building.

Now, the company’s employees work from home—cutting down on commuting time and costs—with service technicians going directly from home to customers rather than making an unnecessary trip to the office beforehand.

Without paperwork to pick-up and drop-off, this is much easier to facilitate.

Beyond the environmental and economic impacts, St. Germain said it has also simplified the business a fair bit.

Under the previous model—which involved a lot of paperwork being mailed—things were lost and wires were crossed. Now, he says, things are much more streamlined.