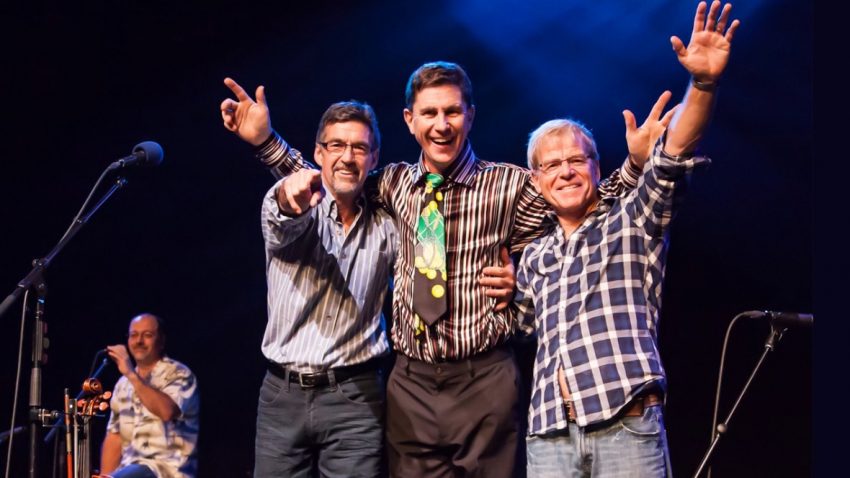 Any Canadian knows Newfoundlanders can throw a party. Renowned maritimer Buddy Wasisname will be bringing that party to the Markham stage. And the other ‘fellers,’ too.

Buddy Wasisname and the Other Fellers—the stage name for Newfoundland natives Wayne Chaulk, Kevin Blackmore and Ray Johnson—is making one final tour through Ontario, including a show at the Flato Markham Theatre. It’s not a retirement tour, Chaulk is quick to say, but rather a farewell to the aggressive touring schedule the long-time friends and bandmates have maintained for the last 35 years.

Part comedy, part musical performance, part storytelling—it’s a winning combination that has worked for the band, whose accomplishments include 20 albums, five DVDs, and countless laughs. So why pull back when things are going so well?

“It’s demanding,” says Chaulk, from his Newfoundland office. “We’re still enjoying it, but you really have to put a lot of time into the preparation. We’re not retiring, but we’re going to cut out the touring.”

Each of the Buddy Wasisname tours feature original material and fresh arrangements along with a few classic staples. This tour is no exception, making the show one for long-time fans or the newly initiated.

When other groups break down in a fraction of the time that the members of Buddy Wasisname and the Other Fellers have been together, what has kept these guys together for so long? It’s a question Chaulk has asked himself.

“After doing it all those years, we really should be pissed off with each other to the point where we can’t create together,” he says with a chuckle. “I’ve watched the history of so many groups who can’t be in the same room, can’t fly together, can’t be at the same hotel. It’s astounding that we can still do it and still enjoy it. We’re still really good friends.”

Part of the secret is that they keep each other laughing. Just as the audience is graced with new material during each tour, the band members are giving each other new reasons to giggle.

“Every time we get together, there’s always one or two of those little ideas that turns into something where we are just disabled from laughing,” Chaulk says. “We still make each other laugh. (Blackmore) will laugh at the idea that I just came up with and I’ll just die when he depicts it in a way that’s beyond what I imagined.”

Tickets $32 to $42, available at www.markhamtheatre.ca