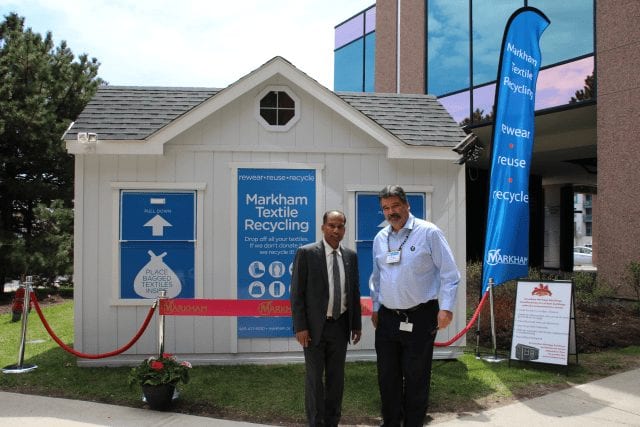 The initiative has been made possible through a $67,000 grant the City of Markham received from the Federation of Canadian Municipalities under the Green Municipal Fund. Markham’s textile recycling program will serve as a demonstration for other municipalities and help build awareness on the carbon costs of textiles ending up in the landfill. Today, more than seven per cent of Markham’s waste is made up of textiles.

“Markham is the best in the country when it comes to waste diversion-we have an over eighty per cent diversion rate,” said Councillor Logan Kanapathi who is on the Environmental and Sustainability committee.

Markham’s strong business partnership with Salvation Army to deliver this program will see Salvation Army providing 100 per cent of the bin collections service at no cost. On a daily basis, the Salvation Army will service the textile donation containers and bring the material to their Markham Thrift Store where items will be sorted to determine suitability for re-wear, reuse or recycling.

The textile donation containers will feature new and cutting-edge technology, including battery-operated sensors that will detect when the bin is full and activate an alert for pick up-to avoid overfilling.

Photo: Councillor Logan Kanapathi with City of Markham director of environmental services Peter Loukes in front of one of the new, larger textile donation containers which will be located at a few key high-traffic locations, including at the Pan Am Centre. There will be many more of the regular size donation containers also located throughout the city later this year.