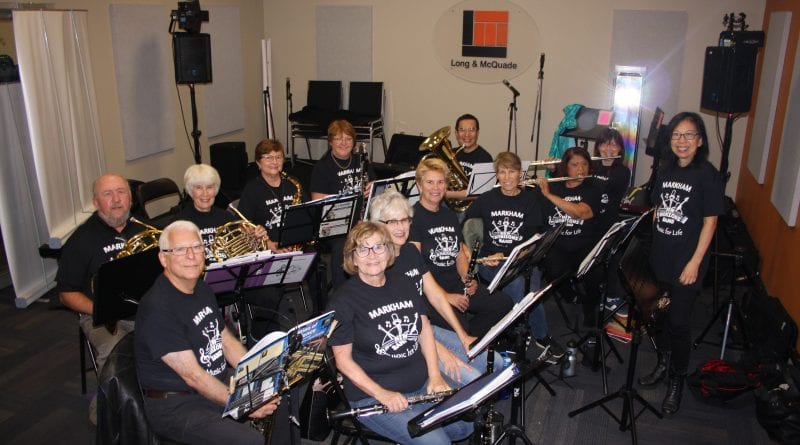 The Markham New Horizons Band wraps up the year with a Christmas concert on Tuesday, Dec. 17.

In the spirit of giving the concert is free to the public.

“We don’t charge anything because we want to be accessible for the members, for the public to share the music we make,” director Soah Lu said. “We want this to be community-centered and give back to the community.”

The band has already made a significant contribution whether it’s helpings adults to learn and/or hone their instrument skills or raising money for organizations such as Markham Pregnancy Centre. Since it began in January 2018, the group has grown to around 20 members. Of the adults, it’s a mix of ages from recently retired to people in the ‘70s, and many have no musical background.

Lu was inspired to start the Markham group after she saw a documentary The Beat Goes On which featured the New Horizons Band of Toronto. She had it in mind since 2016, but wasn’t sure she could do it even though she had been teaching band at the elementary school level for the Toronto District School Board since 1991.

It was a job she loved until she had to retire early in 2016 due to health reasons.

“I was self-questioning whether I could do it on my own. I wanted to be sure before I had a bunch of committed adults,” said Lu, who has no regrets. “I’m just really grateful for being able to do this. They’ve made my retirement really meaningful. They are just life savers, wonderful, vibrant (people who) love music making.”

While her friends assured she could do it with her eyes closed, it took a visit to another new horizons group in Richmond Hill before she felt she could go ahead with it. All of the groups are part of a worldwide organization, New Horizons International Music Association, which was started in 1991 by Dr. Roy Ernest in the U.S.

The only criteria involved in joining is to be an adult. Members pay around $20 a month to cover the cost of music and any expenses. They can try out different instruments to see which ones would suit them.

“They have to practice so they have to like the sound,” Lu said. “Instrumentation or the Markham group includes trumpet, euphonium, clarinet, flute, French horn, percussion, alto and tenor saxophones. We did have a bass guitar, but she’s moved on to an all-woman rock group. I’m so excited for them.”

The Christmas concert on December 17 marks the second one for the group. They will be featuring a program of seasonal and traditional carols, and pieces such as Feliz Navidad, One Small Spark, Emperor Waltz, and Ragtime Ball.

It takes place in the Auditorium – Rehearsal Hall of the Cornell Community Centre from 1:30-2:30 p.m. Anyone interested in joining can contact Lu at [email protected]