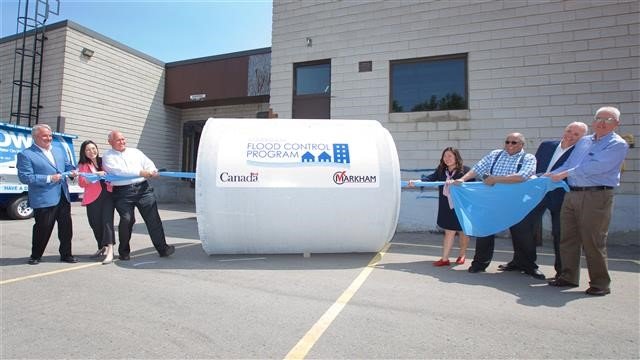 The City of Markham is taking a green approach to flood control with plans to create natural infrastructure spanning five acres, roughly the size of four football fields to protect buildings and roads such as Woodbine Avenue and Highway 404.

“While the Don Mills Channel served a practical purpose, supporting development in the community when it was built in the 1960s,” says Markham Mayor Frank Scarpitti. “Our flood control project will serve a greater purpose – restoring the flood plain back to a more natural state. The pond and downstream culvert upgrades will reduce annual average flood damages by $1.5 million.”

As part of the Government of Canada’s Disaster Mitigation and Adaption Fund (DMAF), the City of Markham has been awarded $48,640,000 for Markham’s Stormwater Management Strategy and Flood Control Program, which includes the Don Mills Channel, West Thornhill and Thornhill Community Centre & Library projects.

These three key projects will increase the capacity of an overloaded storm sewer system, will protect neighbourhoods from potential flooding and sewer backup, while reducing both property damage and the devastating effects on residents and business owners.

The Don Mills Channel industrial area is particularly vulnerable to floods. This project involves reclaiming the flood plain, creating a storage pond and restoring the Don River watershed to its natural state. The naturalization of this area will reduce flood damages, attract natural species and reduce flooding downstream. When the pond is completed, five-year storm flood levels will be one and a half metres lower and small storms will stay in the channel instead of rising up the sides of the buildings.

Past floods in 2005, 2014 and 2017 in Markham have caused significant damage. These infrastructure improvements will help protect vulnerable communities and businesses, reducing flood damages by $575 million over the life of the projects.