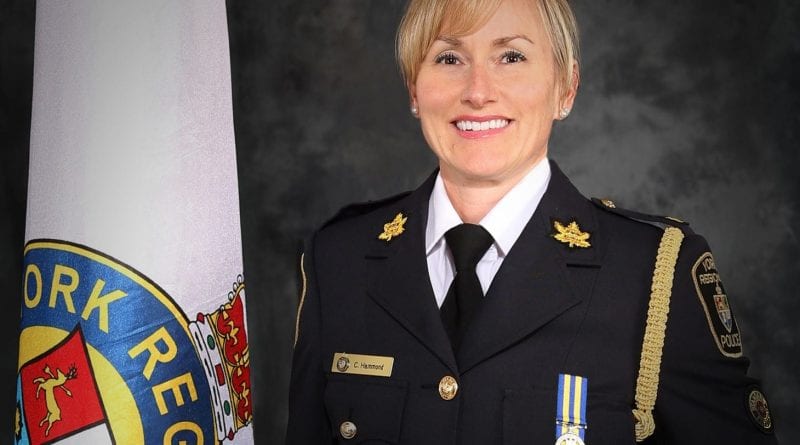 “Superintendents Hammond and Da Silva are exceptional individuals who represent the next generation of talent within the organization,” said police board chair Virginia Hackson. “Both are proven leaders in the policing community and both support the work required to sustain the trust and confidence of the community.”

“I am looking forward to working with both new deputies, whose experience, talent and dedication will benefit our organization and our community,” said Chief Jim MacSween. “They are demonstrated leaders at YRP and I am proud to welcome them to the Executive Command Team.”

Hammond has served in law enforcement for 22 years in a variety of operational and administrative roles including as officer-in-charge of the Integrated Domestic Violence Unit and as Inspector of the Real Time Operations Centre. More recently, she was responsible for overseeing Corporate Development Services tasked with modernizing member training and leadership development. She holds a Bachelor of Arts Degree from York University and is the recipient of the Governor General Exemplary Service 20-year Medal. She is a member of the Ontario Association of Chiefs of Police (OACP) and holds a Police Executive Designation with the Ontario Municipal Management Institute. Hammond has extensive OACP committee involvement including the Police Constable Selection System and the Education, Training and Professional Development Committees.

“I am extremely grateful to have been selected by the Board to serve as Deputy Chief for the York Regional Police,” Hammond said. “I look forward to embarking on this journey working with the members of the Executive Command Team, the Police Services Board, our members and our community.”

Da Silva has served with York Regional Police for 27 years in a number of operational and administrative roles including criminal investigations, community-oriented response and more recently as the Superintendent in Charge of Infrastructure Services where he oversees Capital Projects and Facilities, Information Technology, Information Governance, Property and Evidence and Logistical Support.

Da Silva is the recipient of the Governor General Exemplary Service 20 – year Medal, a graduate of the FBI National Academy, Quantico and the University Of Toronto Joseph L. Rotman School Of Management Police Leadership Program. He also has a Bachelor of Arts degree from the University of Toronto. DaSilva is a member of the Canadian Association of Chiefs of Police (CACP), the Ontario Association of Chiefs of Police (OACP) and FBI National Academy Associates New York State/Eastern Canada Chapter (FBINAA).

“I am truly humbled and honoured to have been selected by the Board to serve as Deputy Chief for the York Regional Police Service,” Da Silva said. “I am equally as honoured to continue to work with the members of this Service and our Community”