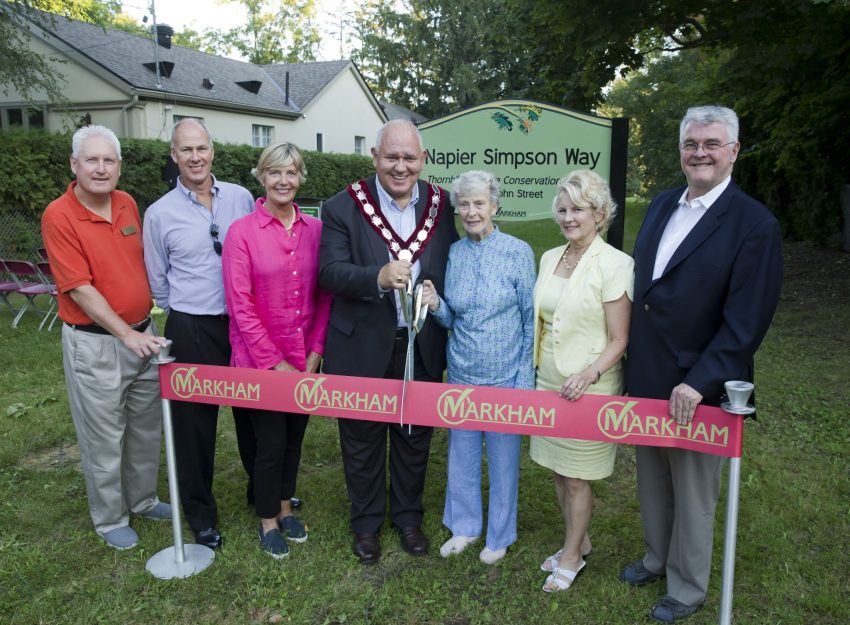 The City of Markham paid tribute to a prominent Ontario architect who helped heighten public awareness of the value of historical conservation and played a significant role in the development of Black Creek Pioneer Village in North York.

The city held a ribbon-cutting ceremony on Sept. 13 to mark the official opening of Napier Simpson Way at John Street. The ceremony was attended by Mrs. Simpson, their son, Napier Simpson III, and daughter, Barbara.

In addition to working on Black Creek Pioneer Village, a working village typical of those established in south-central Ontario between the 1790s and the 1860s, B. Napier Simpson Jr. was also involved in the rehabilitation of Mackenzie House, Colborne Lodge and the buildings at Fort York.

The Simpson House at Riverdale Farm in Toronto was designed to represent the 1850s house on the Francy Farm in Markham Township. The large 1840s Pennsylvania German-type barn was donated by the Francy Family and re-erected at the site of the old Riverdale Zoo. The house and barn were built by the original settlers and acquired by the Francy family in 1875.

For many years, Simpson served as a member of the Toronto Historical Board, the precursor to Heritage Toronto. He was killed in a plane crash in 1978. Simpson was appointed to the Ontario Heritage Foundation and the Historic Sites and Monuments Board of Canada, where he played an active role.