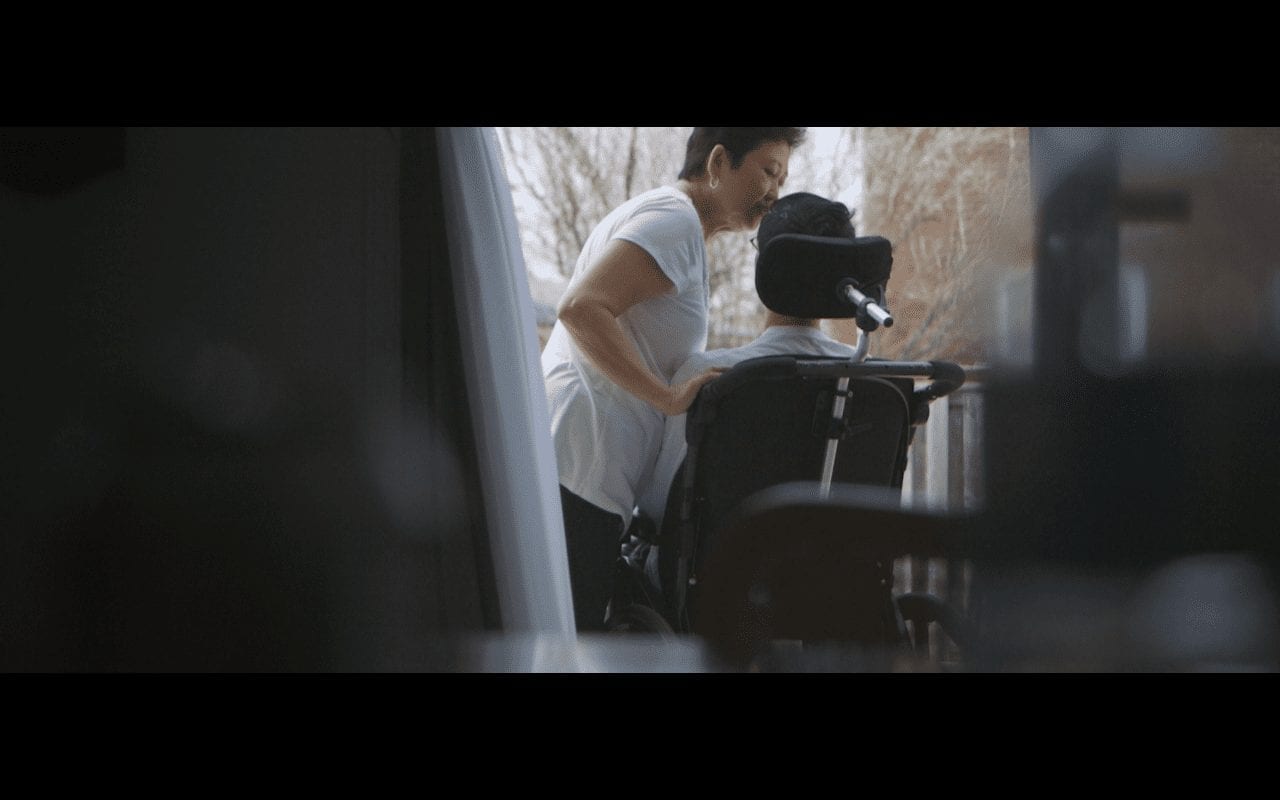 My Son, Christopher, is a film about a young man who lives with amyotrophic lateral sclerosis (ALS), also
known as Lou Gehrig’s disease.
At only 11 minutes long, the film will help you understand ALS, fill you with hope and inspire you.
ALS attacks the motor neurons of the brain and spinal cord. These neurons are responsible for voluntary
muscle movements such as talking, walking, swallowing and breathing. ALS generally starts as a mild muscle
weakness that progresses to paralysis and eventually, death. More simply, a person with ALS will experience
loss of voluntary muscle use slowly, or quickly, until they are unable to catch their breath.
Christopher Chiu was born and raised in Markham, Ontario, Canada. It was January 2011 when he began to feel
slight changes in his body. It began with stubbing his toe while playing volleyball, and reaction times seemed to be
off. By spring Christopher was unable to stretch out his left leg and walked with a limp. This is when
Christopher went to see his doctor and testing began.
A diagnosis of ALS comes through elimination of all other potential neurological diseases. Christopher’s diagnosis
took six months. On October 31, 2011, while Christopher attended a testing of his muscle reaction times, the doctor
announced, you probably have ALS.
Christopher was at the appointment alone. He was 32 years old.
Today, five years after his diagnosis, Christopher lives at home with his parents. His 66 year-old
mother is his main caregiver. The family also employs a full time caregiver and a rotation of personal
support workers who help Christopher with daily living. He is unable to walk, talk, or eat. He is fed
through a tube and communicates using a white board where a friend or caregiver points to each letter
and spells each word. Christopher blinks long for yes.
Over 90 per cent of people who suffer from ALS have no cognitive impairment. This means that Christopher
knows everything that is happening around him and what is happening to him. The majority of ALS patients
lose their battle with ALS between two and five years after diagnosis.
The short film My Son, Christopher, tells Christopher’s story from the point of view
of his mother Alicia. ALS not only changes the life of the person living with the disease, but also those who
love and care of them.
The main purpose of the film, Christopher’s sister Cherrie states, is to have people really see what happens
to your world when ALS enters it, and how we have dealt with it as a family. Cherrie founded Canadian charity
ALS Double Play over two years ago with the intention of raising awareness and funds for ALS research.
My Son, Christopher, lets you into our lives for a brief moment, sharing our hardships and more importantly
how our faith and family keep us strong. We also share the importance of ALS research and how this provides
us with hope for the future, Cherrie says.
Christopher and Cherrie’s parents Alex and Alicia instilled their strong Roman Catholic faith, values and traditions
in both their children. It is not a surprise that Alicia continues to pray daily for Christopher and for a cure for ALS. This resonates throughout the film, along with her care and unconditional love. Also echoing loudly is the fact that
this family did not take ALS lying down. They are determined to make a difference in the ALS community.
While the ALS Ice Bucket Challenge brought ALS to the forefront, awareness of the disease is still lacking. ALS has
no known cure and no effective treatment. On November 17, ALS Double Play is holding their 2nd annual online day
of giving, Hope Gives, take ten minutes to watch the short film My Son, Christopher, and make a donation to help provide
hope to this family and the ALS community.
My Son, Christopher is available online at www.alsdoubleplay.com
Share This Post: