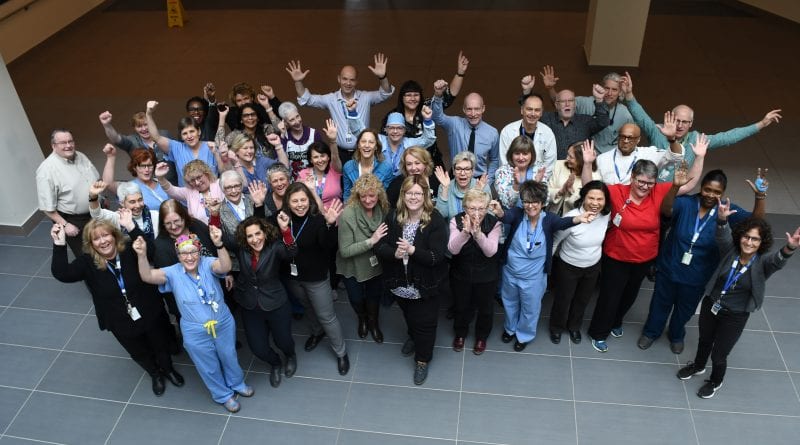 It’s not unusual to hear Markham Stouffville Hospital (MSH) staff share their feelings about going to work each day.

“There’s never been a day I didn’t want to come into work,” Carol Trimble said.

It’s a powerful statement from someone who has spent more than 30 years with the same organization. But it’s how executive assistant Carol Trimble has felt throughout her career at Markham Stouffville Hospital.

March 5, 2020, marked the 30th anniversary of the opening of the Markham site. MSH has been able to build a reputation as one of Ontario’s leading community hospitals over the past 30 years thanks to the many talented and dedicated staff, physicians and volunteers like Trimble who love making a positive difference to the health of our community.

The dream to build a hospital in Markham began in the 1950s with a group of determined residents who began advocating for the facility. In 1967, Stouffville philanthropist Arthur Latcham purchased a 50-acre parcel of land at Ninth Line and Church Street in what was then known as the village of Markham and donated the land for use as a hospital site.

The hospital corporation was founded in 1968 and government approval finally came in 1982. The community quickly rallied and raised $5 million toward the estimated 445 million cost of construction, which began in 1987.

“For those of us who’ve been here since the beginning it was somewhat of a pioneering experience to open a hospital in a place that never had one,” said Dr. Stephen McMahon, MSH’s first orthopaedic surgeon and recently appointed Chief of Surgery.

“We started with one operating room,” McMahon added “I performed the first surgery at the hospital, a knee procedure. There was one other orthopaedic surgeon. Now there are seven. Each one of us has a sub-specialty so we’re able to offer the top standard of care in a range of areas.”

The expansion also allowed the hospital to increase access to numerous other services, leading to important successes such as the launch of the Alongside Midwifery Unit – Canada’s first birthing centre operated by midwives – as well as expanded oncology services with the opening of The Shakir Rehmatullah Cancer Clinic.

“There’s a unique sense of community spirit at MSH – a humble, compassionate and caring culture that’s hard to find anywhere else,” MSH president and CEO Jo-anne Marr said. “It’s a culture that’s been present since day one. Together with our commitment to innovation and passion for providing the very best care, the next 30 years look brighter than ever.”

Main photo: MSH staff, physicians and volunteers who have been with the hospital for 30 years.