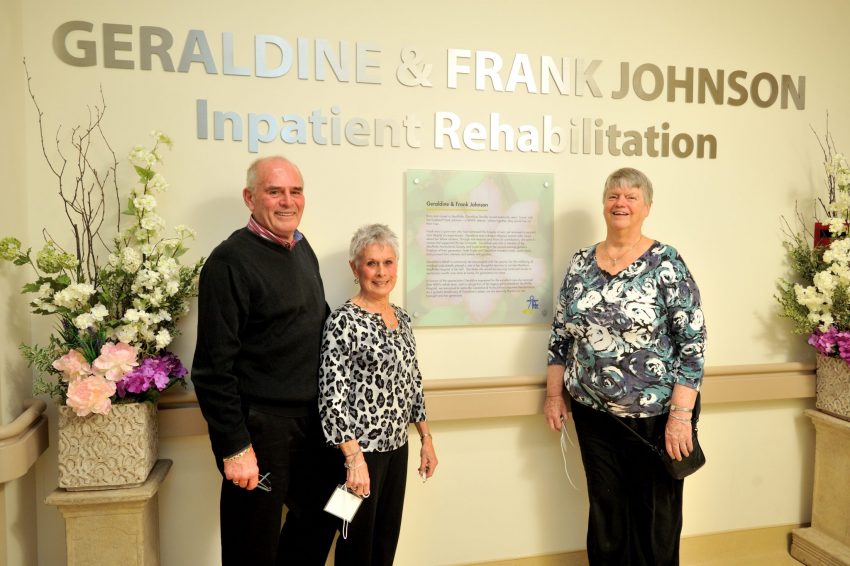 In the summer of 2009, Geraldine Johnson was rushed to Markham Stouffville Hospital (MSH) emergency department. A serious traffic accident in Stouffville left her with multiple severe injuries. Being unable to walk, the 86-year-old Stouffville resident underwent rehab and physiotherapy, at the hospital that also cared for her late husband Frank in the palliative care unit.

It was the outstanding care provided by the rehab team and Curtis Geissberger, along with the memory of Frank’s care, that led Geraldine to leave a substantial legacy gift to MSH in her will.

“Because of the great care and rehab that got her walking again, Geraldine’s life was extended both in time and quality,” said Elaine Stover, Geraldine’s second cousin and close friend. “Curtis was so great, he would certainly get her to move and exercise and throw the ball—her upper body was strong and he motivated her to use it.”

Geraldine moved into Stouffville Creek Residence on October 5, 2009. Five years later, at the age of 92, she passed away peacefully at MSH.

Geraldine was a deeply religious woman who cared about her fellow citizens. Through volunteerism and financial contributions, she often gave to causes that supported the less fortunate. Geraldine’s belief in community service, coupled with her passion for the well being of mankind, undoubtedly played a role in her decision to include MSH in her will. As one of Geraldine’s estate trustees, Elaine was involved in many conversations with her about how she could leave a lasting impact for the causes she truly cared about. In her will, Geraldine included other favourite Stouffville charities in addition to the hospital.

Elaine has volunteered with MSH for 17 years and hopes the gift will inspire others to financially support MSH. She has seen, first-hand, the impact of what can be achieved through community support.

“The hospital is the cornerstone of the community and everybody knows somebody that’s been here,” she said. “It touches a lot of lives.”

In recognition of Geraldine’s legacy gift, MSH Foundation named the Geraldine & Frank Johnson Inpatient Rehabilitation. Elaine remembers Geraldine as conservative and reserved with a good sense of humour and a contagious giggle. She believes the honour of this naming would leave Geraldine truly humbled.

May is Leave A Legacy Month, a public awareness campaign that encourages people to leave a gift through their will or other planned giving opportunities.

Visit mshf.on.ca/legacy for more information about giving back to MSH.