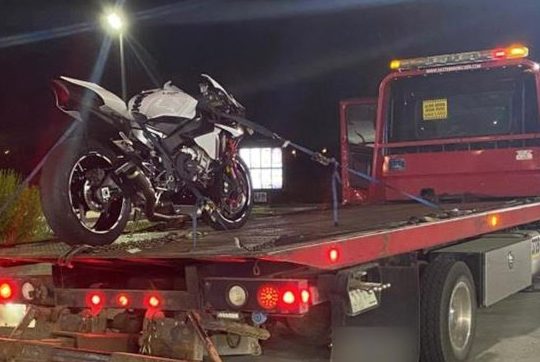 The driver of a motorcycle is facing a criminal charges after being seen speeding on Highway 407.

On Friday, July 31, 2020, shortly after midnight, Air2 was patrolling the south end of Vaughan following weeks of complaints from the community regarding loud vehicle noise from cars and motorcycles that regularly attend a nearby parking lot for meets.

The officer in the helicopter observed five motorcycles travelling west on Highway 407 at a high rate of speed. Air2 monitored the vehicles which reached speeds of more than 190 km/h, and relayed information to officers on the ground. When officers attempted to stop the vehicles, they failed to stop and fled from the scene.

Air2 continued to monitor them and directed officers to the location of one of the motorcycles that had stopped. Officers arrived, boxed in the motorcycle and arrested the driver.

A 37-year-old man, of Brampton, is facing seven charges, including flight from police, speeding, and stunt driving. The investigation is ongoing regarding the other four motorcycles.