A Markham husband and wife face a number of trafficking charges after more than $400,000 worth of illegal drugs were seized from two homes, including one in which they lived with their children.

York Regional Police Organized Crime Bureau – Gun, Gangs and Drug Enforcement Unit officers launched an investigation after learning about male and female suspects believed to be trafficking a variety of drugs. The suspects were using two Markham homes to store the drugs they eventually sold.

After a search, police found a large quantity of drugs, including 704 grams of methamphetamine, 1,110 grams of ketamine, 653 grams of cocaine, 617 grams of MDMA, 426 grams of heroin believed to contain fentanyl, 28 grams of ecstasy, 26 ecstasy pills, 161 MDMA pills, 1.5 litres of GHB and 21 pounds of marihuana. 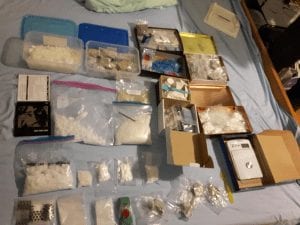