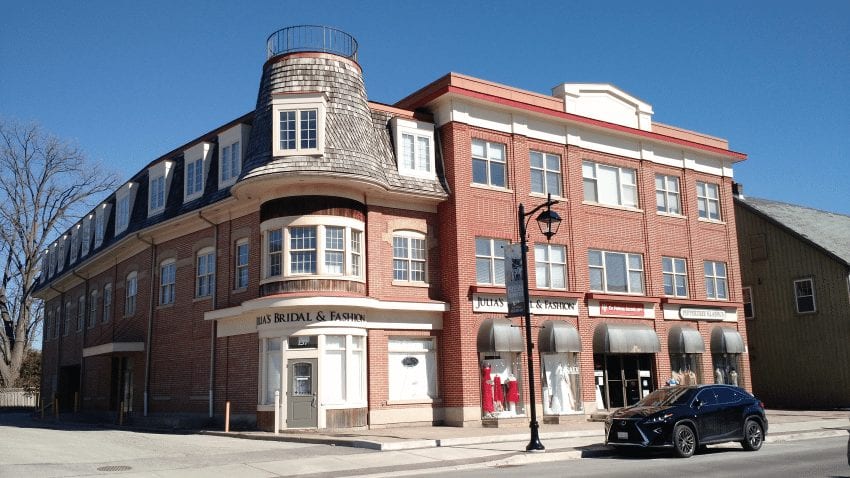 A century and a half ago, just as Canadian Confederation was underway, the north end of the commercial core of Markham Village was a busy place. On the east side of Main Street, in the vicinity of today’s St. Andrew’s Presbyterian Church, there was a cluster of industrial activity that included the carriage factory of Henry Wales, the pump and fanning mill factory of David Cash, and the wagon works of James Pringle.

The Pringle wagon works was one of the oldest and longest-lasting of these important early businesses. James Pringle, a Scottish immigrant, came to Canada in 1832. Pringle was a wheelwright by trade. He first lived at Hogg’s Hollow, a mill village north of Toronto, and married Johanna Wanless there in 1836. That same year, the family moved to Markham Village, where James Pringle established a wagon works on a property now addressed 135-137 Main Street North.

A business directory of 1866 lists five wagon and carriage makers working in Markham Village at that time. There must have been a large demand for horse-drawn vehicles to support so many competing manufacturers. The types of vehicles they made ranged from sturdy farm wagons to elegant carriages and sleighs. Personal transportation seems to have been as important to people then as it is now and their manufacture and sale was a significant contributor to the local economy.

The Pringles suffered a setback in 1872 when a fire involving a number of Main Street properties destroyed their home and factory buildings. After the fire, James Pringle handed the family business over to his sons Robert and George. The house and factory were re-built and in 1873 the wagon works became known as R & G Pringle. Contemporary accounts describe R & G Pringle as a “flourishing wagon and carriage business” with a turnover of $10,660 a year, employing 15 men.

Robert Pringle, head of the firm, built a handsome brick house on George Street, directly to the east of the wagon works, about 1890. In addition to his successful business pursuits, he served as a member of the council of Markham Village after it was incorporated in the early 1870s. His brother George lived in a more modest house on Church Street. Both Pringle homes remain standing.

The work of R & G Pringle was highly regarded. In 1923 a local newspaper stated that “to this day the name “Pringle” is a synonym of good work and material.” In spite of their high standards, competition gradually brought about a decline in business. A fire destroyed the wagon works in 1917, and this time, the factory was not re-built. Robert Pringle and his second wife, Rosanna “Rosa” Nighswander moved to Toronto to live with their son Charles, a few years after the fire.

Not long after the fire, a harness shop and residence were built on the R & G Pringle wagon works property for Charles F. Todds. The Todds harness shop produced harness for the Canadian Cavalry during the First World War. The buildings stood until relatively recent times, just north of the old Tremont Hotel. In 1990, a new commercial building was constructed on the site, addressed 135-137 Main Street North.

This commercial building stands on the site of the Pringle wagon works, an important manufacturing business established in 1836.