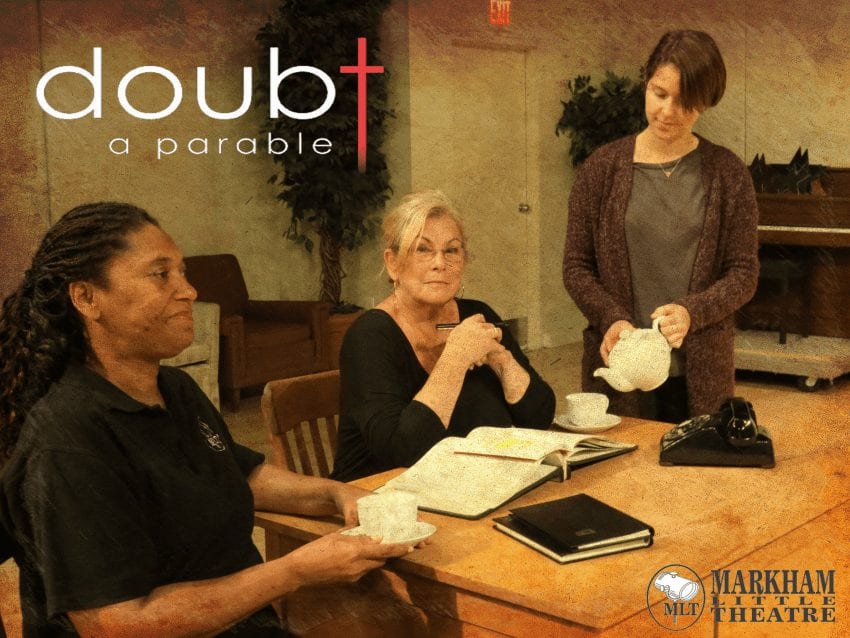 With Markham Little Theatre’s second play of the season opening this month, the company tackles a dramatic thriller that that explores the fine line between fact and ambiguity. Winner of the Tony Award for Best Play and the Pulitzer Prize for Drama, John Patrick Shanley’s Doubt: A Parable examines how far one is willing to go in the name of Truth.

Sister Aloysius is the no-nonsense principal of St. Nicholas School in New York in 1964. She suspects a priest, Father Flynn, may have had an inappropriate relationship with one of her students. In the middle is the child, represented by his mother, Mrs. Muller and the child’s teacher, Sister James.

“The story is both timeless and contemporary,” says Terry Browne, one of the show’s co-producers, “filled with issues that resonate in today’s society.”

“The play was written ten years ago and takes place fifty years ago,” adds co-producer Joanna Barr. “Exploring the early discoveries of malfeasance in the hierarchy of the Catholic Church while, at the same time, being aware of the aftermath, gives the audience a riveting and excellent vantage point.”

Born in the Bronx, where this play is set, playwright Shanley was raised Catholic and drew from his own educational experiences at the hands of the Sisters of Charity. In the preface to the play, he writes that “Doubt requires more courage than conviction does, and more energy, because conviction is a resting place and doubt is infinite.”

“Finding the correct dramatic piece for the Markham stage is always a challenge,” Browne continues, “We have to produce a play that we feel will stand up to a comparison to our wonderful comedies for outright entertainment value. The demands may be more confined but they must be extremely focused.”

“Doubt is one that fills the bill,” Barr says with assurance. “It’s a cracking bit of suspense that will keep the audience on the edge of their seats wondering did he or didn’t he?”

Father Flynn, the suspect in this drama, will be played by Markham Little Theatre (MLT) veteran John Sellens while Michèle Browne plays Sister Aloysius, the suspicious cleric. Browne is well known to the Markham audience for her long list of performances over the past thirty-five years.

Mallorie Davies is new to MLT and was cast as Sister James for her ability to balance the nuances described in the script as “having sunshine in her heart though she’s reserved as well.”

Val Martinez takes on the demanding role of Mrs. Muller, concerned mother of the young lad at the centre of the controversy. This is quite a departure from Val’s memorable comedy turn as Willy’s nurse in the MLT production of Sunshine Boys.

With scripts like Doubt being tackled by Markham Little Theatre, their success is likely to continue for decades to come.

MLT presents Doubt: a parable at 8pm from Nov. 16-19. Visit www.markhamlittletheatre.ca for details.