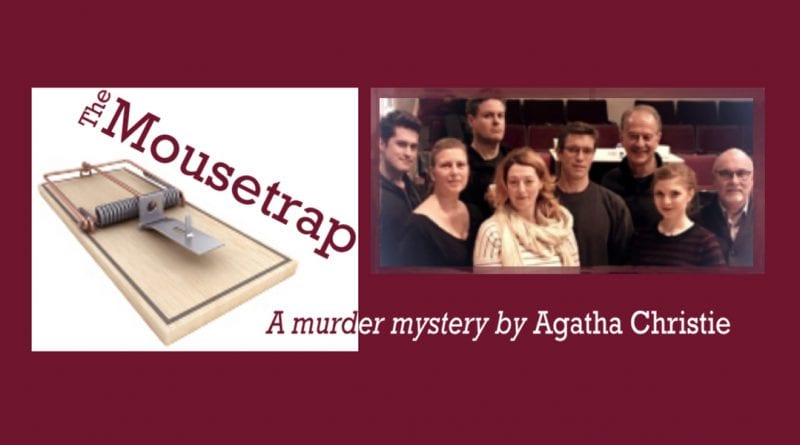 There are many legends and tall tales when it comes to the world of theatre. Trading such stories is a pastime for both lovers and creators of theatre. Every so often however, there’s a true story that is taller than any of the tales.

That is the case when it comes to Agatha Christie’s murder mystery play, The Mousetrap. The story is clever, the dialogue is witty yet charming and the whole thing finishes with a delicious twist. Ms. Christie predicted, upon the show’s opening in 1952, that it might get a strong run of 14 months. She was wrong. As of this year, that same production in London passed 26,000 performances. It’s still open and running. The unassuming play has grown to be the longest running show in the world.

Markham Little Theatre brings the theatrical legend to the Markham Theatre as its fourth show of the 2018/2019 season.

“Part of the production’s allure lies in the secrecy,” explains Sarah MacDonald, the show’s co-director. “Audience members who learn the plot are sworn to silence in order to retain the aura of mystery.”

The plot of the show is simple enough. Mollie Ralston and her husband Giles have just opened their bed and breakfast, the Monkswell Manor House. After a night of bad weather, all of their guests are snowed in and no one can leave. As the guests hunker down, a radio broadcast warns that a woman’s murderer is on the loose nearby. From there, the fun is largely in the performances. The guests, hosts and local police stumble, bumble, and try to stay alive long enough for the snow outside to melt.

Of course, MLT’s production is brand new and relies on the talents of local creators. The show is being directed by veteran Michele Browne along with MacDonald. The cast of eight features many who have been onstage with the company before and a few new faces.

“We have a fantastic group of actors,” says MacDonald. “It’s exciting to watch the characters on a page come to life, and our cast has created an intriguing and entertaining group of suspects.”

Harrison Browne and Shelagh Carlini take on the roles of the hosts Christopher Wren and Mollie Ralston. Their guests include Beverly Sotropa, John Featherstone, Harry Hochman, Jessica Ducharme and Carl Gambcort. Rounding out the cast as Detective Sgt. Trotter is Steve Birtles. Of course, the directors and cast are just the most visible when it comes to the production.

“There are countless people who have contributed in countless ways,” explains Atherton.  “The set alone has had 23 people working on it, designing, building, painting, and decorating … it’s going to be beautiful.”

Set designer Ron Brownsberger has decided to pay homage to the original London production with the set. He spent many hours doing research to get his tribute just right and nearly two dozen others have spent hours more bringing it to life.

“We can hardly wait to see their creation on the stage,” says MacDonald.

As an all-volunteer organization more than a half century old, Markham Little Theatre has built an impressive community that thrives on the work.

“MLT members are so dedicated and the commitment is just contagious,” says Atherton. “There are so many opportunities and always someone to mentor you. There are absolutely no limits.”

“Our members come from all walks of life, but their experiences combine to create something that is both rewarding and a lot of fun,” adds MacDonald. “We’re always learning something new and meeting new challenges.”

Indeed, bringing a legendary British play to a Markham stage seems like quite a challenge.

“We plan to put on an exciting and entertaining show,” says MacDonald. “But, keep the secret. Seeing the show means you’ve joined an exclusive group of people who know the truth.”