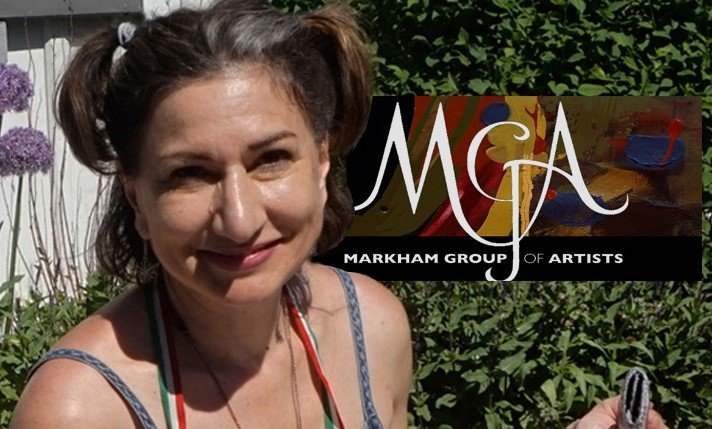 After graduating from Guelph University with a Bachelor of Fine Arts degree Linda McIntosh settled in Toronto where she worked for many years in graphic design as art director.

After marrying in 1998, she moved to Markham and raised two boys. She returned to her artistic passion and joined the Markham Group of Artists, where she has been an active member for 12 years.

“The group embraced me, and things took off,” McIntosh recalls. “Many artists work alone and can’t often get feedback, but the camaraderie and mutual support received from the members encourages and inspires my creativity.”

The Markham Group of Artists holds workshops, demonstrations, offers many exhibition opportunities and has done several collaborative community projects. McIntosh says that the experience has been one of total immersion, that it has allowed her to grow, make connections, and develop her talent.

The group’s last three months of the season were disrupted by the COVID-19 pandemic, interrupting show plans and other projects. The biggest challenge has been how to connect while practicing physical distancing. A project requiring a lot of collaboration has pulled them through.

A year ago, the Markham Group of Artists was commissioned by the City of Markham and the Markham Village Conservancy to complete a mosaic that will be installed at the new Morgan Park pool. The mosaic captures the spirit of Markham, paying homage to the past including the rose garden that had been at the site of the pool, while also looking forward.

She has been researching Markham’s history and incorporated historical images of families and their stories into the project. “There is a cycle of life in the art,” she says.

“The fact that the art is being completed during the COVID pandemic makes it that much more special and the process shows how people in isolation can work together, McIntosh says. “It has given the artists a positive outlook, kept them focussed and productive.”

To respect physical distancing while collaborating, McIntosh would drop off mosaic materials at the doorstep of more vulnerable artists to complete, then wave to each other from the window and communicate over the phone. Other more able artists dropped off their canvas tiles to her garage which became a makeshift production studio.

While cooperating in the creation of the Morgan Park art project, the forced distance also brought them together.