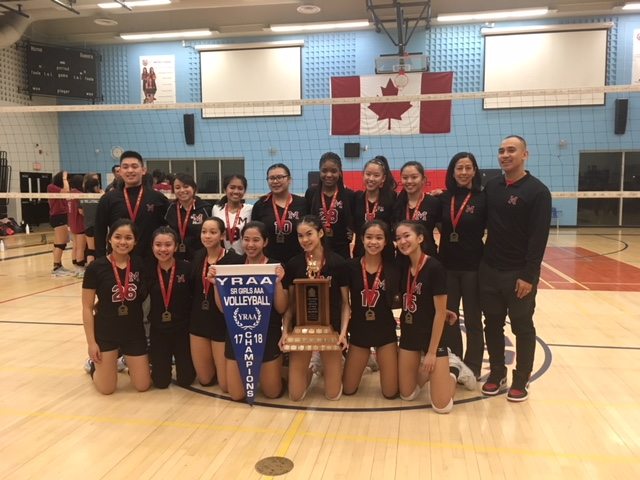 A set, a game, a season. One point can change the course of everything for a volleyball team.

For the Father McGivney Magic, playing in the senior girls York Region Athletic Association’s triple-A final, their game-breaker came in the third set. Tied at one win apiece and 18-18 in the penultimate set, three Magic players made outstanding defensive plays to keep the ball off of their floor and get it over the net.

“In practice and throughout the season, we talked about championship points,” said Magic coach Allan Ambida. “I always say to the girls that you have to win those rallies, because those are momentum breakers or momentum builders. You want those points to end up in your favour, and that one did. It’s nice to have a defensive stop and then get a kill on our own end.”

Catherine Lim’s outstretched arm kept Unionville’s blast from hitting the floor and she did just enough to deflect it towards Rachel How. While the all-star player got a piece of the ball, it caromed out at what appeared to be an impossible angle, but Samantha Loshusan turned away from the net and, in desperation, knocked it over the net. When the ball ultimately landed in Unionville’s half of the court, Lim and her teammates let out their biggest cheer of the match.

“It was just in the moment,” Lim said. “We let our training take over. It was instinct. I didn’t know that it was over until it hit the ground.”

From that point on, the Magic would never trail again in the match, as the young squad took control like it had all season.

“We have three starters that are in Grade 9, two more in Grade 11 and a good group on the bench who could have played, too,” Ambida said of his team, which won multiple tournaments this season. “They’ve been consistent, regardless of who is on the court. Everyone has a role and they know how to play well together.”

While the Father McGivney squad went a perfect 10-0 in the regular season, it began the finals looking a little shaky, as inexperience played a factor in its first-set loss.

“It was definitely nerves,” Ambida said. “Being a young team, there’s definitely a lot of pressure to perform in this type of setting. We made a lot of mistakes that we don’t normally make, but it happens at this type of level. Hopefully, because we’re a young team, it’s something they can learn from and build on. We only lose two girls next year, so it’ll be a good experience for them to have going forward.”

Even a veteran like Lim, the only player on the senior squad last year, had butterflies in the moment.

“You have to stay calm,” Lim said. “I know I ramp up sometimes, and my teammates were reminding me that I was a good passer and just need to calm down. It’s just being there at the right moment and right spot. If someone doesn’t get the ball, then it’s up to you to help.”

Lim went back to the message her coach had implored on countless occasions.

“This is ultimately just a game and you’ve got to make the most of it,” Lim said. “Our coach always told us to play to have fun. You might be angry because you didn’t get the last pass, but you can’t play angry. You play to have fun.”

Lim, as one of two players exiting the program after the provincial championships, wanted to enjoy every second of it.

“I’m just trying to make the most of it, making memories,” she said. “I wish I had another year with these girls. The year before, all of the other girls graduated and I had no one else left from last year. We started to bond here and the season went by so fast.”

With York Region given two berths, both Father McGivney and Unionville advanced to the Ontario Federation of School Athletic Association (OFSAA) finals in London.

“I’ve known the coaches at Unionville for a while, and it’s great to get to coach against your friends,” Ambida said. “We both get to go to OFSAA and we’re not just representing York Region, we’re representing Markham.”

Father McGivney went on the win the consolation championship in dramatic fashion, needing five sets for all three of its playoff games.