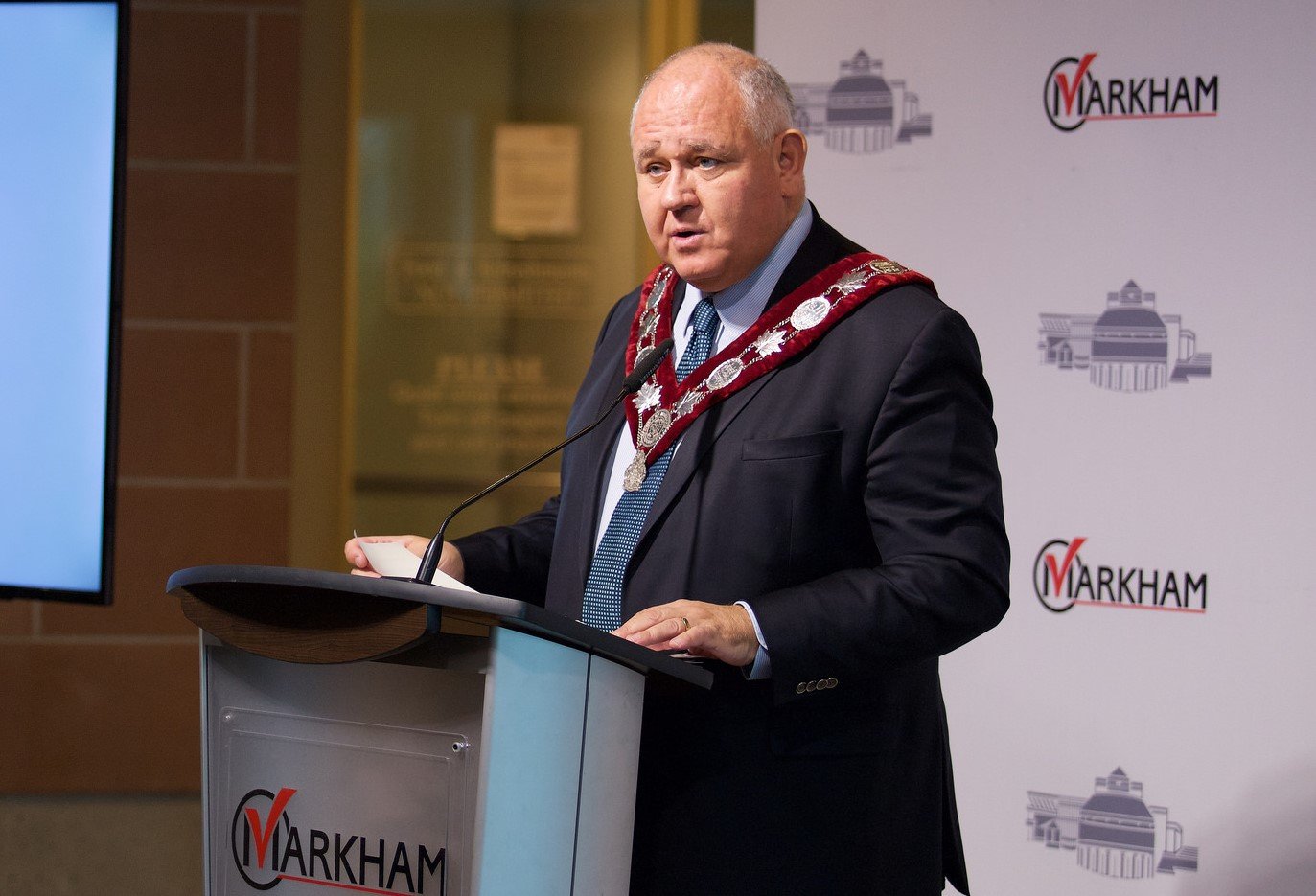 Markham Mayor Frank Scarpitti delivered a message of unity in his address to the newly elected city council at the inaugural meeting of municipal leaders, held Dec. 7 at the Flato Markham Theatre. He explained that whatever lies on the horizon for Markham, a city council and an electorate that connects and joins forces will be key in helping provide the important foundation to move ahead.

While it’s always important that the past is recognized, the Markham mayor said what can be achieved moving ahead can be done by connecting. He compared it to building a house.

“Think of the points where two pieces of wood meet, where they are joined,” said Scarpitti, who is entering his fourth term at the city helm. “It is stronger there and those two points enable the house to stand strong. When we work together, when we join hands, when we connect to each other, that connection becomes a point of strength. There is power in connection.”

Markham residents certainly felt a connection to Scarpitti, who was the clear choice ahead of four other candidates in the municipal elections, held on Oct. 22. First elected as mayor in 2006, Scarpitti received 55,553 votes, adding up to 74.94 per cent of the ballots cast.

He recently celebrated 30 years of public service, recalling how late Mayor Tony Roman then asked him to run for Markham council.

“Thank you, Markham, for providing me with the privilege of continuing to serve you as your mayor,” Scarpitti said, during the inaugural meeting. “There is no greater honour.”

Part of that power to connect will be through technology. The mayor says Markham is set to ride that transformation into the future. They’ll be advancing Digital Markham, a blueprint to create a “frictionless city,” with technology that is seamless, accessible and integrated.

“As we advance technology, living labs in Markham Centre and other areas will address the challenges of mobility, traffic management, improving connectivity and the customer experience,” he explained. “Technology allows us to reach over the horizon and into the future, while at the same time creating a community where people want to be.”

Providing spaces that can bring residents together will also be an important part of Mayor Scarpitti’s vision. As will shoring up spaces like the Markham Centre, which he calls a treasure.

“We will put a shine to that jewel with the creation of a fully integrated and animated pathway system that will stretch from Warden to Kennedy,” the mayor said. “You will be drawn into the beautiful natural surroundings. You will be inspired by public art, adding another dimension to that experience.”

Scarpitti says the time has also come for a new Markham Civic Square. At the heart of Markham centre, the “vibrant space” will host major community, national and international events.

“This outdoor space of celebration will be one of the largest in Canada,” he said.

The mayor also spoke of how creating a desirable community is key to the city’s economic prosperity, where the young and talented want to plant roots in the city. Still, with young people having a tough time breaking into the housing market, affordable housing will be a key. The demand for rental housing far outpaces what is being built. Scarpitti will be hosting an Affordable Housing Summit, with the goal aimed at bringing together different levels of government, the development industry and members of the community.

“That is why we are moving forward with Inclusionary Zoning, that will require large-scale developments to include affordable housing units,” he said.

Infrastructure projects will also continue to be of importance, focusing on making intersections more efficient, along with using smart technology to improve traffic flow.

Bringing the next generation of innovators will also be a focus, which is why the hope is to form partnerships that will create the Centre of International Talent.

“(It) will provide training, leverage technology to find new ways of interacting with our world and with each other,” Scarpitti said.

He called Markham a global destination and said they are set to launch Destination Markham, which builds on the city’s success of hosting major sporting and cultural events and conferences. Plans are also to launch a signature innovation district, with the new zone being home to a mix of emerging and leading industries.

“We will continue to revitalize our existing employment areas with an infusion of new industry like digital media and film production,” he added.

Scarpitti, along with the new council, will get down to the business of running the city at council chambers on Dec. 12.

Photo: Markham Mayor Frank Scarpitti delivered a message of unity in his address to the newly elected Markham city council on Dec. 7.