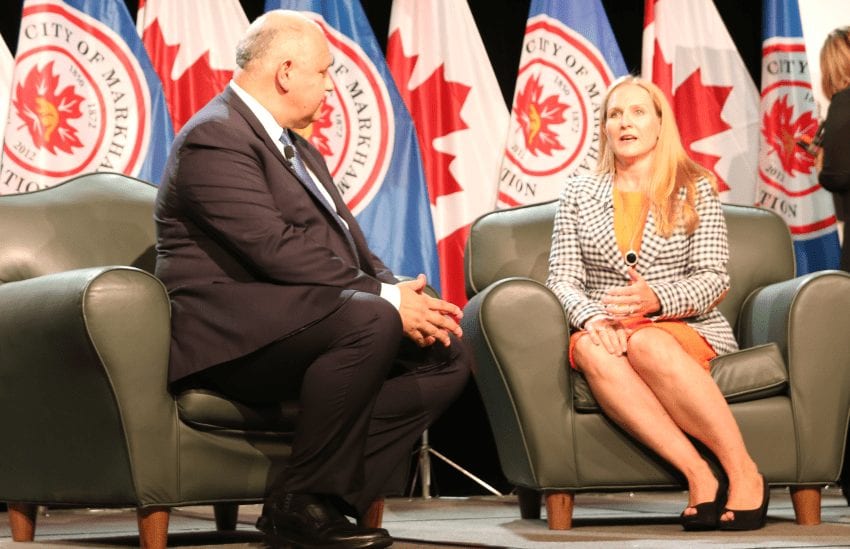 The annual mayor’s address hosted by the Markham Board of Trade was again a pinnacle of the business year for most, as a full house of movers, shakers and hobnobbers assembled Tuesday at the Hilton in Markham. They came to be seen, do some business and get another boost of self-confidence. Mayor Frank Scarpitti did not disappoint as he revved up the business troops with Markham-based success stories and grand things still yet to come.

Revisiting the sit-down format for some of his engagements, complete with the “TD chairs” the mayor delivered a lively pep talk peppered with videos of local business stars like niche car manufacturer Multimatic, who Ford has tapped to build it’s 600 horsepower supercar; Mobis, a bigger entity who opened a 550,000 sq, ft. warehouse supplying Hyundai and Kia dealers with auto parts; and companies like tiny success stories like Green Owl, an app builder funneling traffic data to commuter weary residents; and Hatch a cold-brew coffee start-up.

The event served as a showcase for Markham’s growth strategy, that pushes high-tech jobs, intensification and international networking. All part of what he termed “Generation Next.”

Citing successful trade missions to India and China, where a “Markham Street” was christened in Nanhai, Scarpitti insisted that the City’s determination to extend cooperation internationally is paying rewards locally already, pointing to China-based Huawei, the world’s largest telecommunications manufacturer, who recently announced another investment in the area with a $300 million commitment to research 5G technology.

Scarpitti also pointed to civic innovation and cooperation as well, to position Markham as a place to live and do business. He citied Markham Centre as an emerging hub that has secured insurer Aviva as a tenant, opening its doors and 1500 jobs in the community starting next year. Similarly, the York University hub at 407 and Kennedy was kept in the foreground of development plans.

“We live in a city that is blessed with stability, growth, innovation, diversity and a beautiful natural environment,” noted Scarpitti. “Innovation and advances in technology will continue to power our economy. Generation Next professionals and entrepreneurs in Markham will keep enriching our lives. Generation next is making our future look very, very bright.”

Photo: The 2016 Markham Mayor’s Annual Address was full of big promises for the future but also looked back to some early success stories as he chatted with Cailey Stollery whose family was instrumental in developing key areas in Markham including the renowned Angus Glen Golf Club.