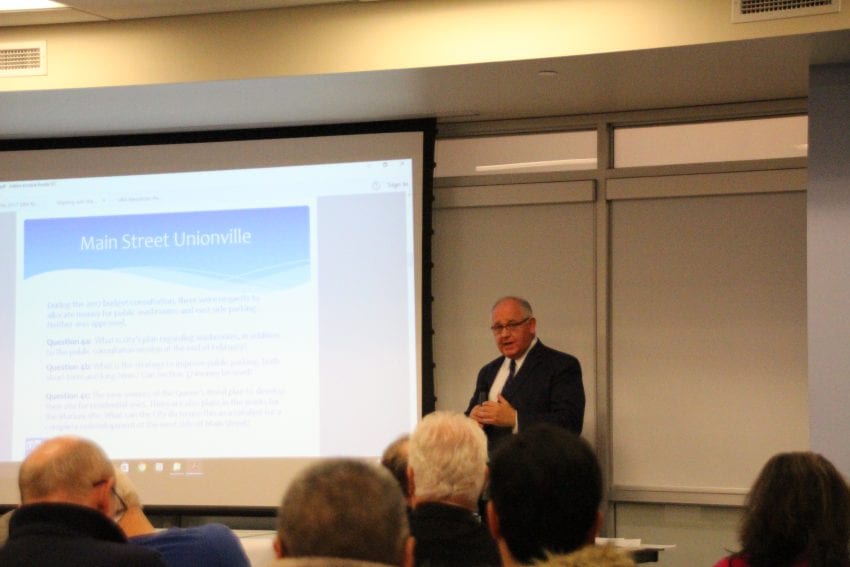 The new Markham Centre, job growth, an increasing population, and affordable housing were some of the hot topics at a recent Unionville Ratepayers’ Association (URA) meeting.

The URA had lots of questions for the mayor at its February meeting.

The first issue presented was the State of Markham and Council’s endorsement of an “environment first approach” to employment and residential growth in 2031.

Scarpitti shared plans to increase Markham’s population to 420,000 people and 240,000 jobs by 2020, pointing specifically to the new General Motor’s Innovation Centre that will create up to 700 local engineering jobs.

Markham Centre is also expected to house 40,000 people and 40,000 jobs by 2020. The mayor pointed to the tax benefits of new industry property taxpayers who do not require the same municipal services as residential property taxpayers.

The Mayor’s Markham Centre update included 22,860 units (45,000 people) the city is preparing for with zoning approvals for 18,000 units already in place. The impending arrival of York University is also placing many developments in the pipeline, including a new Mobility Hub.

The City has been working on an agreement and funding from the province for the past year on site planning and next steps for the new campus. Formal approval has been received by the university who will commence their site plan application this fall.

Construction of the first stage will start in 2018 with a planned opening in 2021 that will bring an initial student population of 4,000 which is then expected to grow to 15,000. Residents should expect to start seeing activity starting later this year on site near the Pan Am Centre.

An integration with Unionville Go Station, in collaboration with Metrolinx, is also in the works and will include a regular 15-minute train service (within the next six years), increased Viva services and a hub where all transit meets. Unionville will have a multi-level integration of transit, shopping, and dining for which $71,000 is already in the city’s budget for the current phase of the project. A rapid transit bus line will be added further down the line to complete an integrated transit system that forms a Mobility Hub.

Other topics discussed were Markham’s housing strategy for key, lower income workers to which the mayor referred to the city’s strong track record on developments like Tony Wong Place. He advised that they work within a fee structure to assist affordable housing projects and dependent on other levels of government to get them off the ground.

Scarpitti said that council is still working on a solution to the lack of public washrooms on Unionville Main Street and within a complicated process toward improving public parking access.

For more information on the URA go to their website: www.unionvilleratepayers.com.