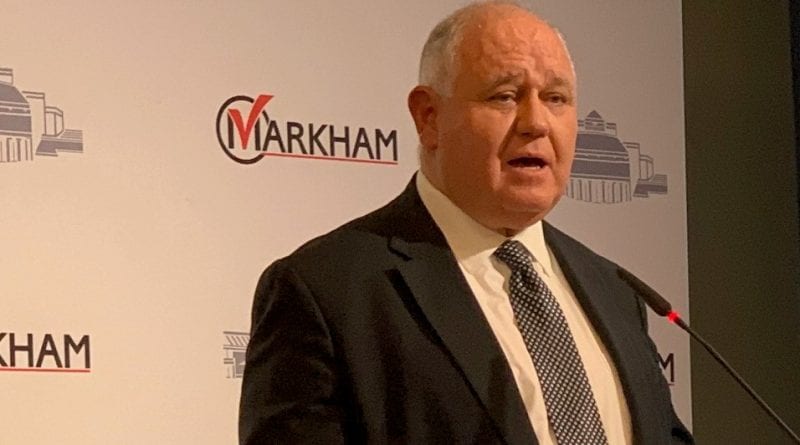 As the mayor and council presented the new municipal budget, outlining what you will pay in local taxes and what you’ll get for your money, their eyes were on another budget. And, they like what they saw.

Leading into what will be a hotly contested federal election in the fall, the Liberal government budget was obviously designed to please many of the key voting sectors it sees as important to it’s fall fortunes. But while municipalities are creatures of provincial jurisdiction, the feds found a way to avoid troublesome provincial governments and ingratiate themselves directly to local communities by presenting a windfall of cash by way of the established gas tax fund.

“I applaud this federal government for the increase of $2.2 billion in the Federal Gas Tax Fund for municipal infrastructure,” said Markham Mayor Frank Scarpitti. “The City of Markham is expected to receive a one-time doubling of annual funding representing an additional $9.6 million. Markham, along with other municipalities, has long advocated for financial support from senior levels of government to advance key local infrastructure projects.”

He noted that similar funds raised through taxes would result in an eight per cent property tax increase.

The mayor also welcomed more funds for making municipal buildings more efficient, assistance for new home buyers and a $10-billion fund to develop a stock of rental and affordable housing to be split among other municipalities.

“I am pleased Prime Minister Trudeau followed through on his commitment to providing the dollars we need at the local level for local prioritie,” he said, while urging the one-time election year boost become an annual event.

Photo: Mayor Frank Scarpitti likes what he sees in the new federal budget