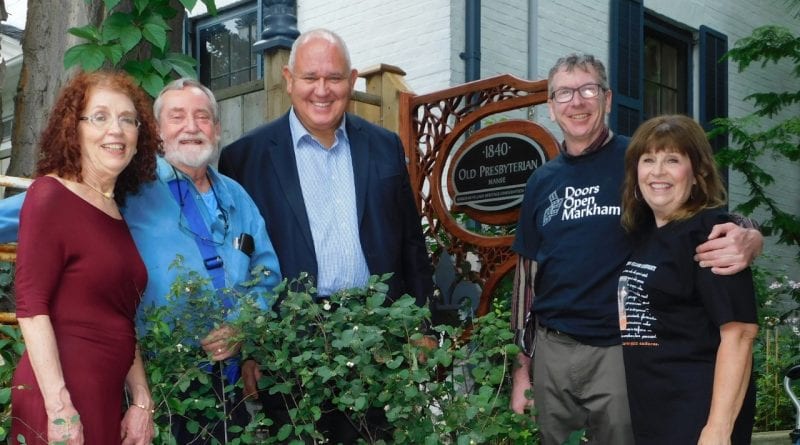 The house is known as the Old Presbyterian Manse and was built in 1840. There had been two additions to the original house, one in 1862 and another in the 1940s. Although the three sections are now a single unit, the mark of their time was evident in the architecture, fireplaces, and décor.

The vestibule and entrance hall floor had been painted to look as if it were linoleum. The walls leading to the second floor had been painted by hand, likely with a stencil added Peter. The design is beautiful—long-stemmed light blue flowers. The Ross’s had taken great care to preserve the original structure including baseboards, doors frames, door lock, and floors. Their renovations enhanced the unique character of the building and included customized kitchen cabinets, garden rich in natural foliage, Victorian-era vases, chandelier and a dome over the stove that Yvette explained were often found in France.

Peter said that the masonry on the fireplace was superb. It could heat the entire room in minutes. He also expressed some regret but was still hopeful that they might find the original owner’s hammer. After working as a blacksmith in Lachine, Quebec the son of a United Empire Loyalist the Reverend David Youmans chose a different calling and was ordained as a deacon for the Methodist Church. He was known as “The Old Hammer.” The Senior Heritage Planner George Duncan reports that this may have been due to his preaching style and its relationship to his earlier career as a blacksmith.

The Mayor’s visit to Ross’s home also recognized Peter’s service to Markham Village. Dianne related that he has been involved in several committees over the years and is dedicated to heritage. He was one of the founding members of the Main Street Markham committee. Dianne said that she had just nominated him for the Mayor’s Seniors Hall of Fame. The ceremony will take place on October 3rd.

After the project to commemorate heritage homes on Peter Street had been completed, the Markham Village Conservancy wanted to present the Ross’s with a plaque for their home. The woodworker fashioned the plaque frame to recognize Yvette’s French heritage, the fleur de lis and Peter’s Scottish heritage, thistle.