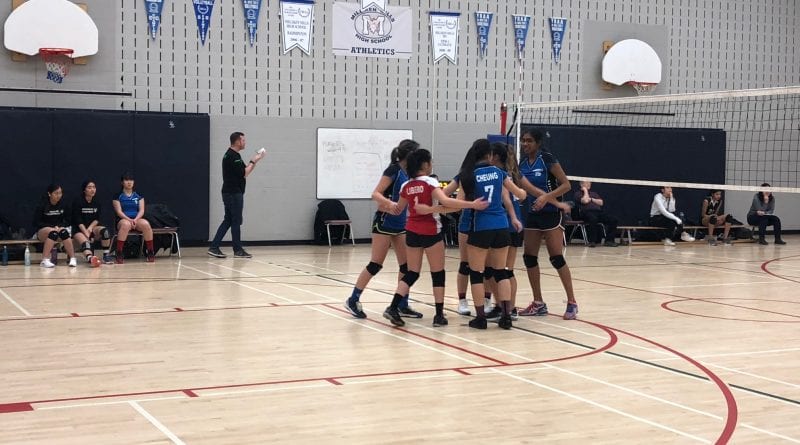 It’s always a good idea to keep a positive attitude.

For the Markville Mavericks, their strength in that category has helped lead them to success this season.

A strong year in York Region Athletic Association (YRAA) Tier 2 for the senior girls volleyball team has come from the right mindset and hard work.

“I think we really have good chemistry and we train really hard during practices,” said Markville captain Victoria Cheung. “Our dedication that we all have to contributing to the team also really helps.”

Most of the players have been teammates for a number of years now, and have plenty of experience working as a cohesive unit.

“The team chemistry is pretty good, because we have been playing with each other for a while,” said Markville’s Caitlin Mackinnon. “The girls have all been together on the team in the past, first in junior and now in senior.

“We’ve played with each other for two years and we feel like we know each other pretty well.”

Markville’s biggest addition this year hasn’t been on the floor for a single point.

Head coach Voula Stavrikis has brought a great attitude to the team, and it’s made the players feel and play their very best.

“Our coach is really good and she’s really relaxed,” said Mackinnon of Stavrikis. “Instead of getting angry or yelling at us all of the time, she makes us feel comfortable and confident.

“This year, a lot of players came out of their shell, and a lot of that is because she makes us feel good and comfortable.”

Mackinnon includes Cheung among the list of players that have blossomed this year.

“Even our captain as well, she was much more shy before,” Mackinnon said. “I’ve known her for a long time, and she used to be so shy and quiet.

“Now, she’s really getting out there and being a great leader.”

As team captain this season, Cheung brings a lot to the table for her Mavericks.

“Obviously, there are a lot of different skills and techniques that I can bring here, but also my attitude, so always being able to support your team members when you’re down,” Cheung said.

She’s one of the players still playing rep, and she knows how important it is to keep the morale of her fellow Mavericks high.

“The last thing we want is for one mistake to lead to more mistakes, and then they can accumulate,” Cheung said. “So we really want to pick our teammate up to help them play to their full potential.”

This means that, even when someone flubs a shot, they and the team can laugh about it as they congregate for their post-point huddle.

“We’re absolutely positive and we should be,” Mackinnon said. “If it’s not positive, then their confidence will get lower and it will definitely destroy their self-esteem for the rest of the game.”

That’s all part of Markville’s work as a tight-knit unit.

“It’s extremely important because volleyball is such a team sport,” Mackinnon said. “You really can’t get anywhere without communication. If one person isn’t working with the other five, then it isn’t going to work. You need to be working together as a team.

“That’s why you’ll see, after every point, we all come together and just tell each other, ‘good job’.”

With the positivity radiating throughout the entire Mavericks squad, they can’t wait to get to the gym for a game or practice.

“It’s really fun,” Cheung said. “We’re all friends outside of school, so we all talk, and it’s just a good time.

“It’s been so much fun all four years, really.”

Stephen Sweet photo – After every point, win or lose, the Markville Mavericks come together and boost their spirits.