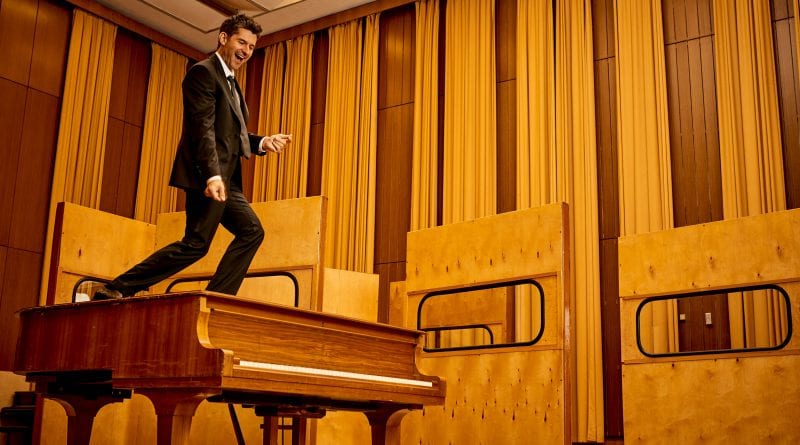 Take a trip down memory lane to 1966 when Frank Sinatra, along with the rest of the Rat Pack, ruled Las Vegas.

Matt Dusk returns to Markham with a new show and an album of favourite Sinatra songs, some with new arrangements.

“We’re all recapturing the moment when you first fell in love with this kind of music,” said Dusk, who is bringing ‘Sinatra with Matt Dusk’ to the Flato Markham Theatre on Friday, Nov. 15. “So it’s super high energy, lots of fun, comedy, music, sing-a-long and some very tender moments.”

He’s been singing Sinatra songs all his life, but has never recorded any until now. The album came out of a studio session when Dusk and a large big band of musicians recorded 17 songs in 7 hours, live off the floor.

“What I realized on the floor is that great music never dies and in a world of technology and speed-making and social media, it seems like music nowadays has become disposable,” he said. “But these songs I’m singing at the show linger on. People at the show probably know every lyric. I think it’s a beautiful classic art form that shouldn’t be lost.”

He still has all of his grandparents’ old records of singers such as Sinatra, Perry Como, and Tony Bennett. Music has been a part of his life from the time he was a child singing and touring with Toronto’s St. Michael’s Choir School.

He’s taken master classes with musicians such as Oscar Peterson, recorded everything from pop to jazz, released 12 studio albums, sold over one million albums worldwide and garnered accolades from around the globe including four Juno awards, one ADISQ, and one Róze Gali w kategorii Muzyka (Poland).

Dusk has forged a career out of jazz, and he likes to recreate a little Las Vegas wherever he goes. He lived and performed there for four years, but has since moved back to Canada and currently lives in Toronto, with his wife and three-year-old daughter.

While there are many well-known Sinatra songs – Come Fly With Me, I’ve Got You Under My Skin, Fly Me To The Moon, and One For My Baby – Dusk does have his favourites. One of the songs that he performs in every show is My Way, written by Paul Anka.

“That song is so iconic. First of all, because the lyrics came from a 29-year-old guy but were sung by a man (Sinatra) who was well into the twilight of his career,” he said. “It just shows you that a great lyric can pretty much transcend every age group. When I perform it, the lyrics consume me based upon life, time, and experience.

For the Markham show, Dusk will be performing with a similar size band as Sinatra, seven musicians. It is part of a two-month tour of Ontario and the US.