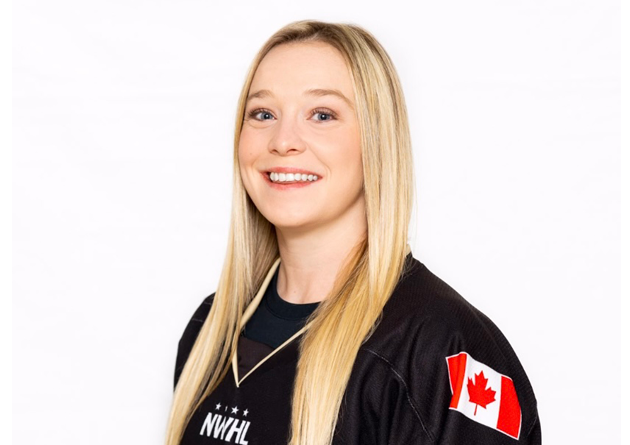 After playing hockey in New York and Sweden, Markham native Breanne Wilson-Bennett will be joining the NWHL’s Toronto Six for their inaugural season in January.

The 24-year-old will be joining the team in their two-week run in Lake Placid, New York, where they will be playing both the regular season games and the Isobel Cup playoffs in a bubble environment.

Her spot on the team comes after two decades of playing the game, which all started at the age of four. At the time, Wilson-Bennett played with her brother and her neighbours in their backyard rink, but soon after her mom registered her to play in the Timbits hockey program.

“From an early age, I was definitely aware that I was the only girl out there and that I could never make the NHL. It just wasn’t in the cards as a girl,” said Wilson-Bennett. “But there was just something about hockey and I knew I just loved it more than anything.”

Wilson-Bennett later went on to study at local athletics-based high school, Bill Crothers Secondary School. On top of the achievements she made with the school team, she was named captain of the Toronto Jr. Aeros in their 2013-2014 season and won two gold medals that same year: one at the U18 National Championships with Ontario Red and one at the U18 World Championships with Team Canada.

After high school, Wilson-Bennett moved to New York to play hockey for Colgate University’s women’s team. In her first year with the team she was named Rookie of the Year, but just when she was starting to get accustomed to playing at the collegiate level, she was faced with a challenge in her sophomore year.

“I started losing a bunch of weight and was thirsty all the time…I could not get out of bed and I was just exhausted,” she said. “My mom realized I had lost probably 30 pounds and I just looked really sick and pale, so we went to the ER and turns out I had type one diabetes.”

Wilson-Bennett said that although it took time for her to adjust to her new lifestyle, her diagnosis pushed her to work harder.

“As much as it was a barrier, I think it probably made me a better athlete, a better hockey player, and a better person,” she said. “I think it just pushed me further to want to be the best despite the circumstances and kind of show people that even if you have an illness like this or whatever it may be, you can still do whatever you put your mind to.”

Wilson-Bennett didn’t let her diagnosis define her, having finished her collegiate hockey career with several achievements under her belt. In her senior year she was named assistant captain of the team. She was also the team leader in the face-off circle and was tied for having the most power play goals that season. On top of this, she was named to the All-NCAA Tournament Team and All-USCHO Second Team. One of her stand out moments from her time at Colgate was when she scored three goals in the 2018 NCAA semi-finals, with one goal being the double overtime winner.

After she graduated, Wilson-Bennett took her career to Örnsköldsvik, Sweden where she played for Modo Hockey in the Swedish Hockey League. However after suffering from a concussion, she decided to return home to take a couple months off.

“It just felt right,” said Wilson-Bennett. “I’d be very regretful if I missed the opportunity to play in front of my family again. Most of my family didn’t get the chance to come to Sweden to watch me play or even make it down to New York or any of the other schools in the NCAA. They just never had the chance to go down there and watch me play in person, so I thought this was such a cool opportunity to grow the game and play in front of my friends and family.”

From the start, Wilson-Bennett said she had a strong support system. In addition to the constant encouragement she got from her mom and her brother, she said that her minor league coaches were especially instrumental to her growth and success as a hockey player.

“They looked at me as a hockey player and didn’t let my gender affect their decisions. I know a lot of other parents weren’t happy about that, saying ‘Oh she’s taking an opportunity from my son, it’s not fair,’ but the coaches, they didn’t see it that way which I am so thankful for. I definitely wouldn’t be the player I am and I probably wouldn’t have ended up playing hockey at all if it weren’t for them.”

On top of being a part of the Toronto NWHL team, Wilson-Bennett also coaches a youth girls’ hockey team. She said that through her coaching, she hopes to give them the positive experience and opportunities she’s had playing the sport.

“Whether it’s your gender or you’re afraid of what people think of you, it doesn’t matter if you’re proud of yourself,” she said. “I know that some girls are afraid of what it looks like to be an athlete. There are extremely feminine female athletes, like it’s not what a lot of people are told that female sports is. You can be who you are, whoever that is, and you can be who you are in women’s sports which I absolutely love.”

Wilson-Bennett will be making her NWHL debut with the Toronto Six on Jan. 23. For more details on the team, visit toronto.nwhl.zone.