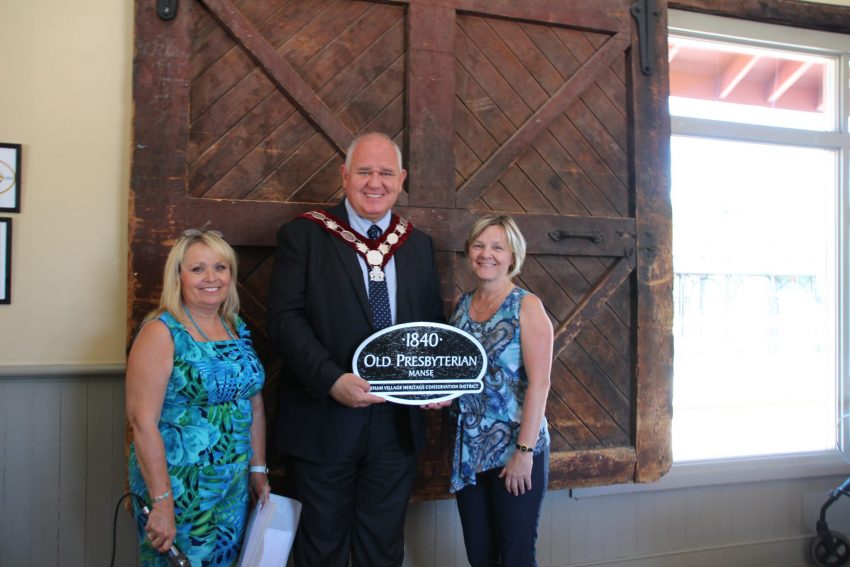 Seventeen buildings in Markham were recently commemorated with plaques gifted to the families, many of whom have retained the property for up to seven generations.

The July 7 event was held at the Markham Village train station and hosted by the Markham Village Conservancy (MVC). Invitations were extended to the families whose histories were briefly recounted by MVC representative Donna Knight before they were honoured with the plaques.  The town crier officially opened the commemorative ceremony.

Two of Knight’s anecdotes included how 89 Main Street South had been built in 1840 for the former blacksmith Reverend Youmans, nicknamed, “The Old Hammer,” for his style of preaching and how Capt. William Armstrong had organized a local militia during the Rebellion of 1837, contributed land for the Markham Fair, as well as building and owning the Wellington Hotel. The home has remained in the hands of the Armstrong family since 1823.

Knight told the story of the of the John G. Coulson House, built in 1914 at Unionville. It has been in the Coulson/Weatherhill family for 75 years. Dr. Coulson, an emeritus professor, had served in the capacity of plant department chair at McGill University, a position which he retained until he reached the age of compulsory retirement in 1958, but tirelessly worked for another 10 years.

The Markham train station, which goes back to 1870, on land originally purchased by Mennonite, Peter Reesor from Pennsylvania, was also honoured. Members of the Conservancy, who oversee its use and maintenance, received the plaque from the mayor.

Historic Markham is retained in these buildings and properties. If it weren’t for the families who care for them to this day, a significant dimension of Markham’s (Reesorville’s) legacy would be forgotten. Mayor Frank Scarpitti acknowledged how many new residents had been drawn to preserve the past and carry it forward in their understanding of historic Markham today.