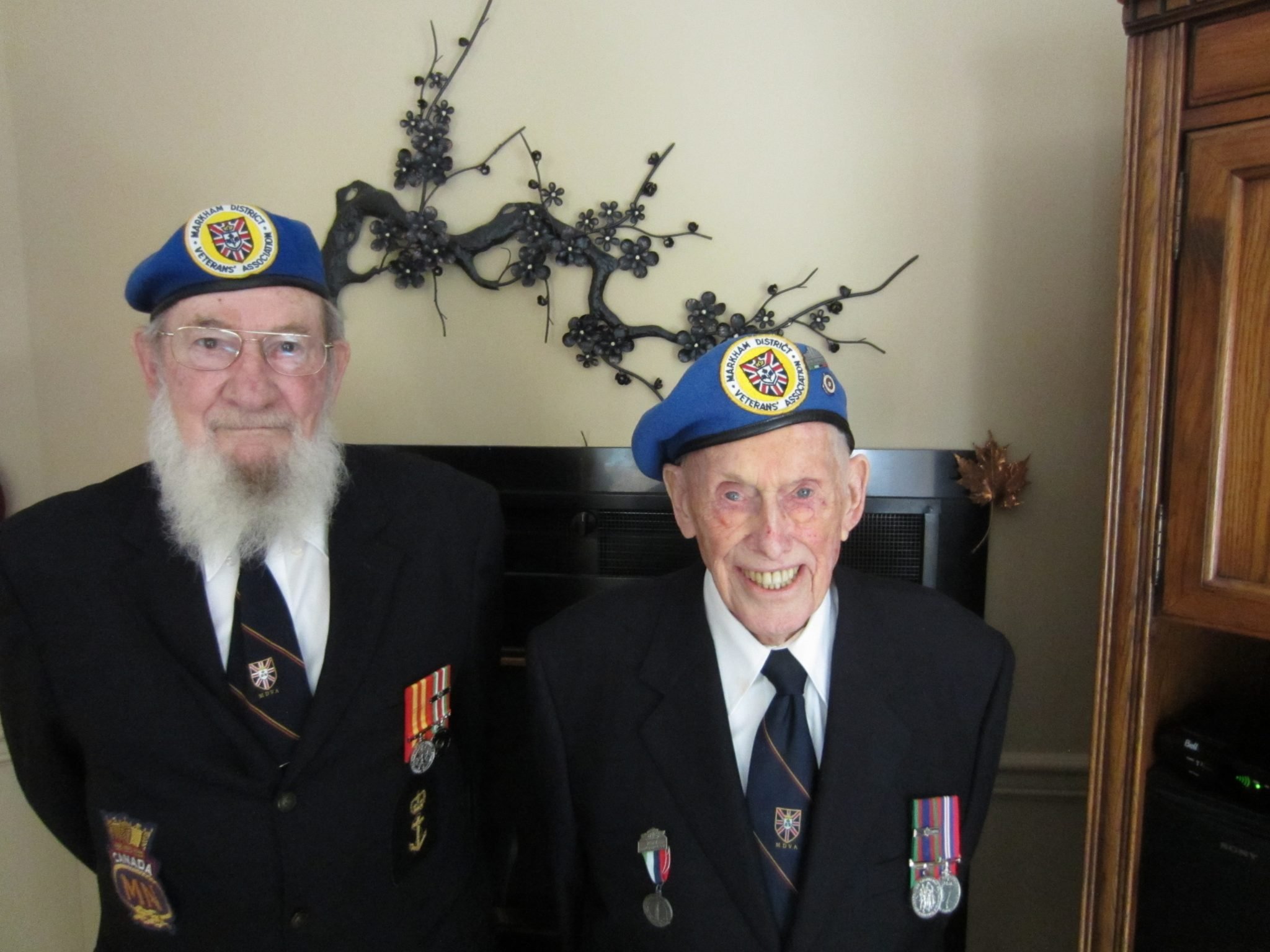 Remembrance Day commemorates the sacrifices Canada’s Armed Forces have made to serve their country by defending and securing democracy. It is a solemn day. During a friendly conversation, Markham’s veterans chose to be remembered in a different way. Here are a few of their stories.

Pat and Karen, the daughters of Stan Hems, tell the tale of the day their father landed on Juno Beach during D-Day, June 1944 with the 3rd Canadian Infantry Division. Pat recalls Stan telling her while serving as a dispatcher, he rode his motorcycle down a road veering to avoid potholes. Later, he learned the holes had been filled with mines. Another time, says Karen, “Stan played a practical joke on the Regimental Sergeant Major. While he was fast asleep, they moved him and his cot onto a dyke (in Holland). When he woke up, he was surrounded by water.”

After enlisting at the Exhibition grounds and training at RCAF Station Jarvis, Don Rattle was sent to Tall Thorpe, Yorkshire in 1943. He serviced Wellington and, later, Lancaster bombers that were raiding German industries. They returned with flak damage and some didn’t make it. He recalls the City of London adopting one of the squadrons, The Snowy Owls, and Quebec adopted the Alouettes. “They would send those squadrons packages for Dominion Day and Christmas.”

John Milligan says he was trained for bombers, but they weren’t needed at the time so, from 1943 to 1946, he served on “bus tours,” transporting troops from England to North Africa, Cairo, Karachi and back for the RCAF. “We were using converted bombers, Liberators.” Once, when taking off while they were practicing circuits, they kept losing an engine, first one and then another. “We couldn’t stop otherwise we would have plowed into an embankment at the end of the runway and exploded. We had just enough power to lift off at the last minute. The undercarriage of the Liberator snagged a tree. By that time, only one engine was working.”

Frank Fuyarchuk arrived at the port of Pusan, Korea in April 1951. The North Koreans were within miles and the United Nation Forces were pushing them back. “Unlike anyone else, the Americans drafted people right out of jail. But they came in with lots of equipment. We were sleeping on the ground, we didn’t have anything, not even bedding. But we had liquor and they didn’t. An American 45-pistol cost them one bottle of gin, a camp cot cost them two quarts of Asahi Japanese beer.” Frank then reflects on a time when things were quieting down on the front. “One time, I couldn’t believe it, we flagged down an American truck. It was transporting ice cream.”

Ernie Thompson joined the Royal Canadian Navy, in 1952, as an airframe mechanic and seaman out of Shearwater, NS. During the Korean War, he spent two to three months doing anti-submarine training. He recalls when two hundred or so planes got caught in the fog and were told to find the nearest aircraft carrier to land. Only one plane got lost and that was American. “One time we went to Rivers, Manitoba to train with the army. It was February 1952. When the Avengers landed, the snow would get into the brakes and freeze. Then we had to break the ice, every day. It took a half hour of cranking just to get a quart of oil into the engines. Talk about cold.”

Markham Review Postscript: Sadly, we report that John Milligan passed away shortly after this article was written, on October 14. We offer our thanks and admiration for John’s service and the life he lived. His courage, wit and charm will be missed by many. Lest we forget.