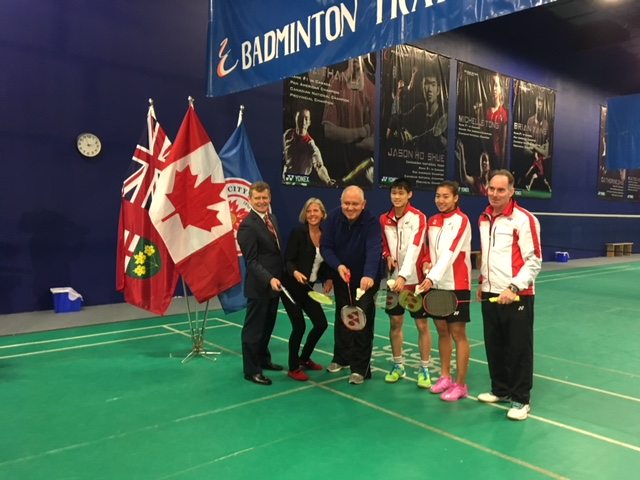 The best young players in the world are coming to Markham.

In November, the Pan-Am Centre will play host to the 2018 World Junior Badminton Championships, a 15-day event featuring athletes from more than 50 countries. This is the third time that Canada has hosted the competition, but it will be the first that takes place in Ontario.

“It’s the second-most popular sport in the world, and the number one participatory sport in Markham schools,” said Markham Mayor Frank Scarpitti. “We have a very strong network of badminton players here in Markham and throughout York Region.”

The mayor was on hand for the announcement at the E Badminton Training Centre, as was Marty Deacon, chair of the World Junior Championships and Ian Moss, Badminton Ontario president along with local stars Michelle Li and Bryan Yang and their Team Canada coach, Mike Butler.

“Our top players are here,” Butler said. “Markham is arguably one of the hotbeds for badminton in North America, so I’m very pleased that you’ve chosen this event. We come to Markham quite often and a number of our top players are here. The world championships will be part of our footprint here.”

The event will be seen around the world, which, Moss believes, will be a great opportunity for the city.

“It puts (the sport) more on the global map,” he said. “It will be a world-televised event and the city can take advantage of that. We certainly hope that the corporate community as well become involved, because the profile will be massive around the world.”

Following the success of the Pan-Am Games, as well as the junior version of the event hosted a year later, the plan and expectation was for the Markham facility to continue housing major events.

“This is being hosted at the Markham Pan-Am facility, one built very much with badminton in mind,” Scarpitti said. “In fact, Markham put in substantial dollars at the time of building the Pan-Am Centre because we realized that the legacy of badminton would live on in that facility. It truly has been centre stage for badminton since the opening of that facility.”

At the Pan-Am Games in 2015, Markham’s Michelle Li won the gold medal in an all-Canadian final, defeating Toronto’s Rachel Honderich in straight sets.

“Michelle and many others have truly inspired a new generation of badminton players,” Scarpitti said. “When kids get a chance to see local athletes perform and win on the global stage and do it in their own community, nothing is equal to that experience for young kids.”

This will be the second opportunity for local product Bryan Yang to compete at the World Juniors and his hope is that the Canadian fans come out with the same fervour that he experienced last year in Indonesia.

“The home crowd was so loud that, when you were playing, you couldn’t hear yourself yell or anything,” said Yang, who practises at the E Badminton Training Centre. “This year, the world championships are in Canada and I’m excited to see the Canadian crowd show the world how loud they can cheer and how excited they are for the world championships.”

Moss suspects that if any Canadian city can bring that kind of enthusiasm towards badminton, it will be Markham.

“It’s massive here and that’s one of the drivers,” he said. “The legacy from the Pan-Am Games has been huge in terms of the volunteer interest and engagement. We’re drawing on that and building that out.”

If this event is successful, the hope is that the junior championships will open the door to more large-scale badminton competitions in the future.

“(The Pan-Am Centre) is a world-class facility, which we needed,” Moss said. “We have it, so we want to use it effectively. This is part of our longer-term strategy. Our goal is to have a world-class senior international competition in the Pan-Am Centre in perpetuity.”