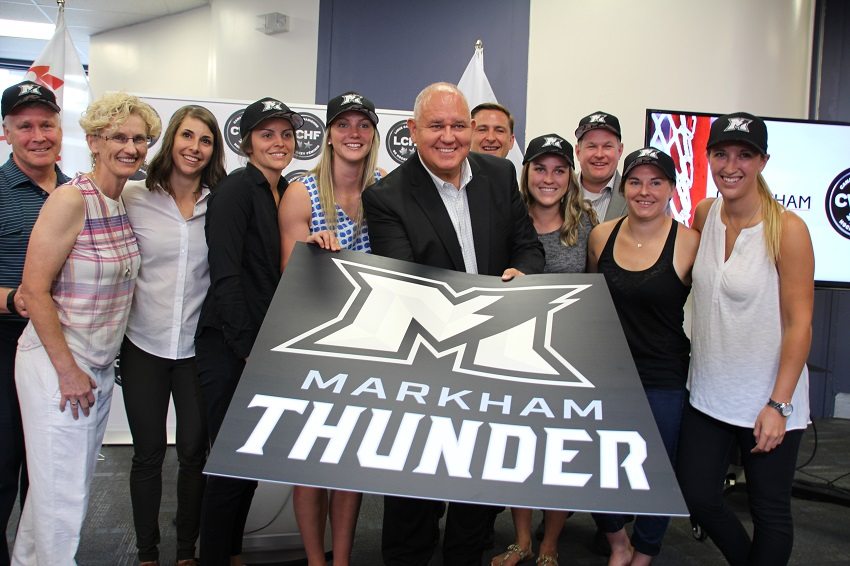 There is something about the sound of thunder that gets your heart beating quickly, and the sound of Markham Thunder had the same effect during the recent announcement that Markham will have its own top-notch women’s hockey team.

The Brampton Thunder hockey team, established in 1998, is the longest running club in the CWHL.

The Thunder played in the National Women’s Hockey League for nine seasons, winning the Championship in the 1998-99 season and then again in the final season. The Thunder have been home to several great Olympians including Jayna Hefford, Vicky Sunohara, Cherie Piper, Gillian Apps and Lori Dupuis.

“The City of Markham has had a strong and successful relationship with the CWHL, including hosting the Clarkson Cup in 2013 and 2014,” said Mayor Frank Scarpitti.  “We are thrilled to be part of the CWHL and hosting a women’s team of this calibre within our community.  This move will continue to increase the profile of female athletes in Markham, in particular women’s hockey and is a perfect synergy with our community girls’ hockey league, the Markham Stouffville Stars.”

This exciting news follows the June CWHL’s announcement that the Kunlun Red Star will be joining the league this fall.

“This partnership with the City of Markham, is another giant step for the future of the CWHL, especially with our recent announcement with Kunlun Red Star joining our league,” said CWHL Commissioner Brenda Andress.”

In June, the CWHL announced a historic five-year deal that will see the Kunlun Red Star (KRS) based in Shenzen, China, join the league for the 2017-18 season.  KRS will encourage the growing interest in hockey and female sport in China in advance of the country hosting the Beijing Winter Olympics in 2022. Through this partnership, KRS aims to have an immediate impact on growing the interest in hockey, more specifically in women’s hockey.