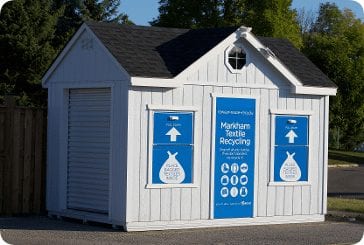 Looking for a place to dispose of single socks and ripped t-shirts and other textiles? Well, look no further. The City of Markham’s textile donation containers are ready and waiting for you.

In less than one year, Markham has turned 3,102,992 million pounds (1,407,763 kilograms) of possible trash into donations. Since the City of Markham first installed textile donation containers across the municipality in the fall of 2016, residents have recycled textiles in a big way.

“Markham’s new award-winning textile program has received a tremendously positive response from our residents,” said Mayor Frank Scarpitti. “The goal of this program is to work with our residents to increase our current waste diversion rate of 81 per cent through textile recycling and prevent textiles from ending up in the landfill.”

According to recent estimates, 95 per cent of clothing thrown out each year could be reused again. When Markham implemented the Clear Bag Program in 2013, asking residents to switch from dark garage bags to clear garbage bags, the City’s Waste Management department noticed that the curbside garbage was full of textiles. Further research found that Markham residents throw out about 15 kilograms (33 pounds) per household each year.

Instead of tossing unwanted textiles out with trash, Markham residents can now take their bagged donations to any one of the many new convenient Markham donation containers located across the City, including Markham Recycling Depots, Fire Stations and community centres. Markham’s textile recycling program accepts all unwanted textiles including single socks, ripped t-shirts, old sheets and worn-out shoes, even items that are torn or stained.

“Markham is the first jurisdiction in Canada to ban all textiles – clothes, towels, curtains, shoes from trash bags starting April 2017,” said Jack Heath, Deputy Mayor and Chair, Waste Diversion Sub-Committee. “Residents are being asked instead to drop them off at new city managed textile donation bins. All donations go to registered charities – The Salvation Army Thrift Store and Diabetes Canada.”

Items that cannot be reused or re-worn will be recycled into new products, such as rags, paper, insulation or shredded down for stuffing or fiber recycling. Items in good condition will be sold at thrift stores, diverting unnecessary waste from landfills, saving natural resources and helping to generate funds and jobs to help those in need.

“Thank you to the Markham community, who have given generously since the textile recycling program has launched. We have calculated the textile diversion efforts in Markham amounting to 2,978,991 pounds (1,351,249 kilograms),” said Tonny Colyn, National Product Acquisitions Manager, The Salvation Army Thrift Store.

The textile program has been made possible through a $67,000 grant the City of Markham received from the Federation of Canadian Municipalities under the Green Municipal Fund. Markham’s textile recycling program serves as a demonstration for other municipalities and helps to build awareness about the carbon costs of textiles ending up in the landfill.