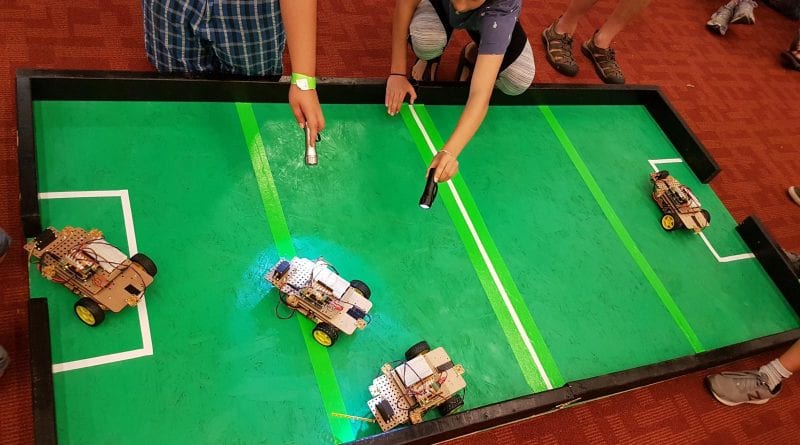 They’re off to the races. Assuming they’re programmed correctly, that is.

Robots collecting research samples on arctic foxes are stranded on an iceberg and must navigate the winding, narrow path of connected floes to return to the arctic research station. The scenario unfolds in the warm and, hopefully, ice-free Angus Glen Library, though the stakes are still high for the teams vying to get their robots back to base the most efficiently.

It’s the first ever BotQuest tournament, hosted by a partnership between the Markham Public Library and Carobot Learning and Research. On March 30, teams of up to four youth ranging from Grades 4-8 will each work with a mentor to complete the large-scale obstacle course.

Carobot’s director for elementary level programs, Jacky Yip, said his organization and the tournament aim to fill a void in community-based initiatives rooted in the growing field of robotics. It’s a natural extension to the popular robotics club that’s been meeting at the Markham Public Library.

“What we wanted to do was bring this upcoming technology to the community,” he said. “There are a lot of parents that have been interested in science, technology, engineering and mathematics (STEM) and trying to find ways to teach this to their kids. You always see on the news these new technologies like new prosthetics that are helping people out, or robots that are revolutionizing how we work in the workplace. So we want to promote this through our community.”

Carobot is not affiliated with the school system, though several school science classes and robotics clubs have invited the group in for various events. Yip said he expects a number of school teams to compete in BotQuest.

Competitors can program their robot using Lego EV3, Arduino or Raspberry Pi. Teams that program a robot to complete its mission without any human intervention get bonus points. Teams lose points if their robots hit an obstacle, go off the course or take a longer time to make it to the finish line. Carobot’s role is fairly hands-off, Yip said. His team wants the students, working with their mentors, to problem-solve their way through the tournament.

“We just set up the challenge for them,” he said.

The map of the course has been made public in advance, as well as the detailed rules, allowing for students to formulate something of a game plan before the day of the tournament. Pizza will be served to all competitors afterwards.

It’s an open tournament, though Yip said most participants will likely have a basic knowledge of robotics already. If not, it’s a valuable skillset.

“It’s growing at such astonishing paces right now,” he added. “Five years ago you probably wouldn’t be hearing much about people flying drones or automated, self-driving cars or whatnot, but now you’re hearing it every week. It’s an interesting field. I think it can be a bit scary for some people, but proper education and knowledge can make good use of the technology.”

Visit carobot.org for more details. Deadline to register is March 23.