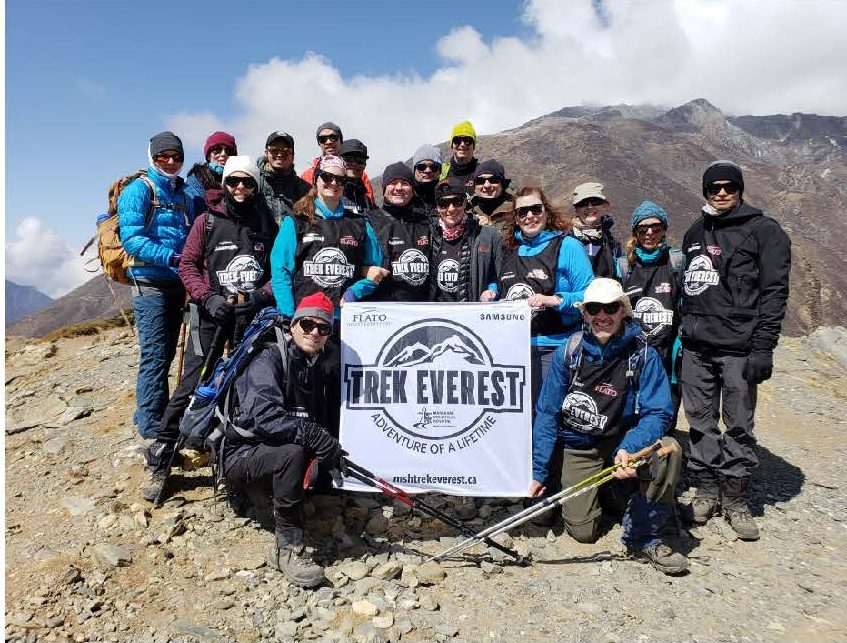 After two weeks of trekking, a dedicated team of Markham Stouffville Hospital (MSH) physicians, clinicians and hospital supporters took on an expedition to Mount Everest base camp through the Himalayan region of Nepal and successfully conquered the feat on May 1.

The team of 25 had only nine months to prepare for the adventure. They exercised a number of days each week, learned breathing techniques and geared up with all the necessary tools for the journey, all to ensure they could handle the tough terrains and varying conditions of one of the highest peaks in the world.

“Our expedition is no doubt one of the hardest, most humbling and most rewarding commitments each of us has ever done,” says Brad Morris, MSH Foundation board chair. “This experience tested our personal limits. Not only were there physical demands on our own fitness levels but physiology and the unknown of one’s body and ability to adapt to altitude and changing conditions were challenges too. Beyond the physical, it was a mental endurance challenge.”

The entire team relied heavily on one another to persevere – some days more difficult than the other. Family physician, Dr. Eileen Lougheed participated in the MSH Foundation adventure to Mount Kilimanjaro in 2011, also alongside her husband Brandon and anticipated some of the medical challenges.

“In similar adventures I have been on, the typical illnesses do surface and they surface on day one,” she said. “They could be as simple as skin abrasions, respiratory infection to gastrointestinal concerns and musculoskeletal. When packing, I typically start from the bottom up and pack all the necessary tools and medicine required that would help support the entire team.”

The adventure coincided with the 65th anniversary celebration of Sir Edmund Hillary’s ascent to the top of Everest. The team was led by the legendary mountaineer, his son, Peter Hillary and accompanied by Andrew Lock, an Australian who has summited all 14 of the world’s 8,000-metre peaks.

“Peter was with us every step of the way,” says Susan Sheffield, MSH child development director. “We were also grateful to share in his passion for what the family has done and visited hospitals and schools that their family had built.”

Prior to the start of the trek – a number of the members volunteered at Nepalese schools and medical facilities as a way to give back to the developing country. That was on top of raising a
minimum of $10,000 each to support surgical care at MSH.

The team is continually fundraising and have raised nearly 80 per cent of their $750,000 goal to help MSH build a specialized “hybrid” operating room that’s expected to cut surgical wait times and improve patient care. Visit mshtrekeverest.ca for more information and to support the cause.

Photo: The MSH Trek Everest Team reach base camp on May 1.