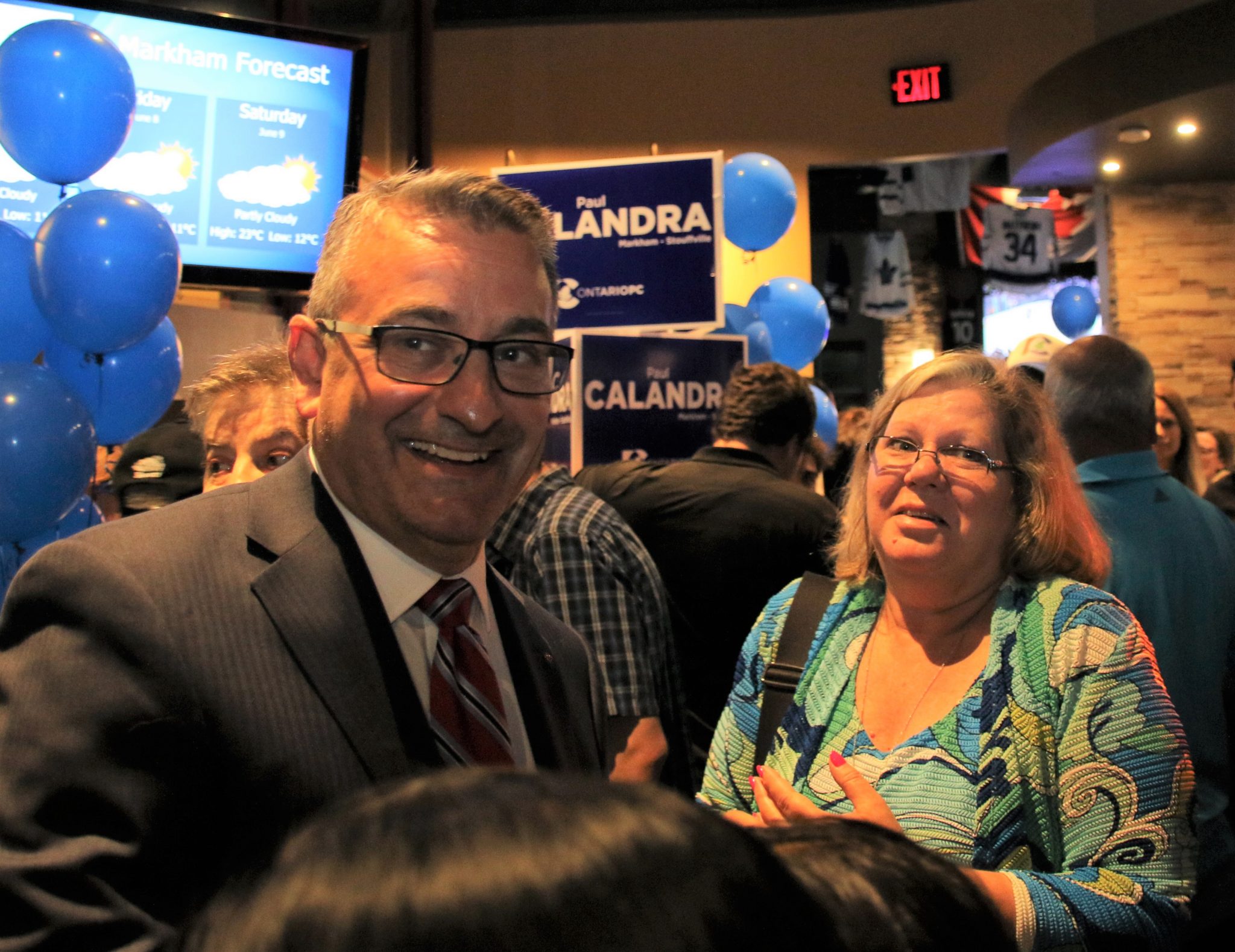 Both Liberals and Progressive Conservatives will agree, it was quite a night and quite a campaign. However each side is looking at it a little differently as a tide of PC blue washed away 15 years of red rule in Ontario, including a Markham and Stouffville landscape that was solidly red until June 7.

Thursday night saw the re-emergence of former MP, Paul Calandra who trounced incumbent Helena Jaczek by more than 12,000 votes becoming Markham-Stouffville’s new member of provincial parliament. “It’s a better night than three years ago when we were here in this same place” noted Calandra, referring to his federal defeat. “It’s good to be back.” And his enthusiastic supporters agreed.

Meanwhile, now-former school trustee Billy Pang was celebrating an even bigger margin win in Markham-Unionville dominating ward councillor Amanda Yeung Collucci who faced criticism within her own party for ditching the Liberal logo and any reference to Kathleen Wynne on her signs and brochures. For good reason it seems, as the Liberal leader seemed intent on dragging her team down until the very end. But even Wynne’s late campaign conce

ssion was too late for Collucci who ended up a distant second, 21,000 votes behind Pang.

Further south, Collucci’s council colleague Logan Kanapathi was enjoying the moment as the new MPP for Markham Thornhill. Gathered with his family and jubilant supporters at The School restaurant, he reaped the benefits of a provincial tide in his favour. His work as a councillor, but also a determined shoes-on-the-ground work ethic saw him knocking on doors until after 6 p.m. on election night. It all seemed to help gain a near-ten thousand vote plurality in what has traditionally been a solidly red section of Markham.

The Markham and Stouffville results mirrored what was happening across the province, including an uptick in NDP support. While polling firms and news outlets predicting a close election, the area was having none of it. Solid local candidates were enough, it seemed, to overcome any hesitation local voters had over controversial PC leader, Doug Ford. More precisely, their dislike for Kathleen Wynne and her smug “sorry-not sorry” approach to voters about her years in office was deeper than many thought.

Although Wynne’s self confidence – some might say arrogance –  might have been a tonic for red die-hards, it was fuel to fire change in the province’s electorate that relegated Liberals to a rump of ridings that, collectively, does not even reach official party status under Elections Ontario rules. So change is what we got provincially and locally. It’s very different political landscape.

How different will it be under Doug Ford? We’re about to find out.