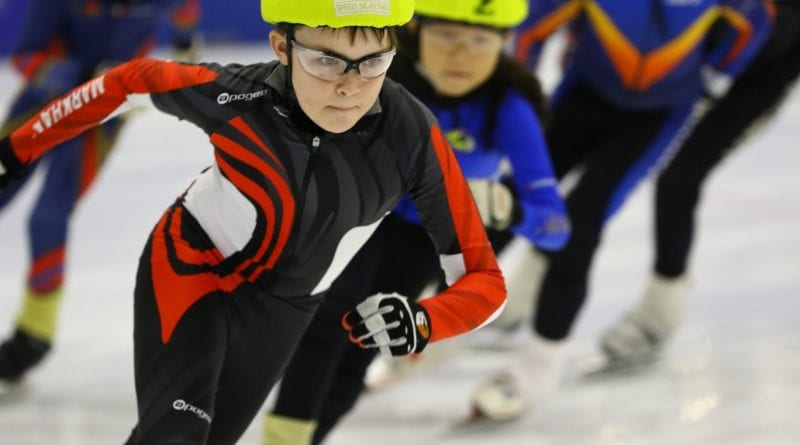 It’s been a great year so far for the Markham Speed Skating Club. With provincial championships on the horizon, it could be even better soon.

This has been a year full of growth and personal bests for the club from top to bottom.

“They’re doing awesome,” said Lisa Liew, who’s been with the Markham Speed Skating Club for the past 10 years. “They’re a great group of kids. We have every level, from regional to world cup, and from cradle to masters. It’s been a really good year.”

During the past decade, Liew has seen the club grow from a single hour of ice time at Mount Joy Arena to the sizable program it is today.

“The club went from one hour a week to six hours a week of ice time,” Liew said. “We have kids doing short-track, long-track, competing nationally and internationally, kids chasing their dreams, all right here in the City of Markham.

“My own daughter dragged me into it,” added Liew. Claire, and now younger brother, Justin, both skate at the club. “It’s a niche sport and, in general, it’s been a hugely supportive community.”

That was apparent as Markham hosted its annual meet back in early December at the Angus Glen Community Centre, which was no small endeavour.

“There was a fantastic outreach of volunteers,” Liew said. “The mats had to be brought over (from Mount Joy) and the track nailed in. They did an amazing job. The city bent over backwards to help us as well. We had more than 160 skaters at the meet, which was our largest turnout ever. It’s a humbling feeling to have that many people want to come.”

The 10th annual meet required more ice time than they’d initially anticipated when it was discovered how many skaters wanted to attend.

A number of Markham skaters medaled at their local event, which focused on short-track competition. Although there is no permanent oval in Ontario, Markham has still produced a number of fine long-track skaters as well.

“We have Tyler (McGillen), who went to Winnipeg to participate in the Canadian age-class championships,” Liew said. “We have Claire (Liew) and Justin (Liew), who went down to the Empire State Games to compete in long track. And we had Ariz Lalani go to attempt to qualify for the Canada Games. He didn’t qualify, but he put up some amazing times, holding his own going up against skaters that train (at the Olympic Oval) in Calgary.”

The athletes at the Markham Speed Skating Club are fortunate to receive tutelage from a former Olympian in Valerie Cavar.

“A lot of what it (comes down to) for the skaters is harnessing their own potential,” Liew said. “We have a fantastic coach and former Olympian in Valerie, and she’s great at inspiring them. She’s been with our club about six years. She volunteers with us and does such a great job.”

While the numbers across the board are up for the club, Liew has noticed the biggest increase comes from skaters in their youngest age group.

“We have a big cradle division, the largest one we’ve ever had in Markham, where there are some kids as young as four,” Liew said. “I don’t know if it’s from the learn-to-skate program or if they were inspired by the Olympics, but more kids were interested in trying it out this year and they’re doing amazing.”

Between the high-level athletes and the recreational ones, Liew believes that there’s a place for everyone at the Markham Speed Skating Club.

“It doesn’t matter if you’re four or 64, there’s a place for you,” Liew said. “You’re welcomed here. There’s no restriction on age, gender or ability. If you want to become the next Catriona Le May Doan or Charles Hamelin, why not? If you want a sport for life, why not? If you’re just in it to get some exercise, lose some weight or socialize, why not? There’s no limits on what you can do and that’s what has kept me in the sport.”

Photo: Markham’s Ben Butterworth, one of 32 local club athletes to compete at their home event, leads the pack in his race. Photo courtesy of the Ontario Speed Skating Association.