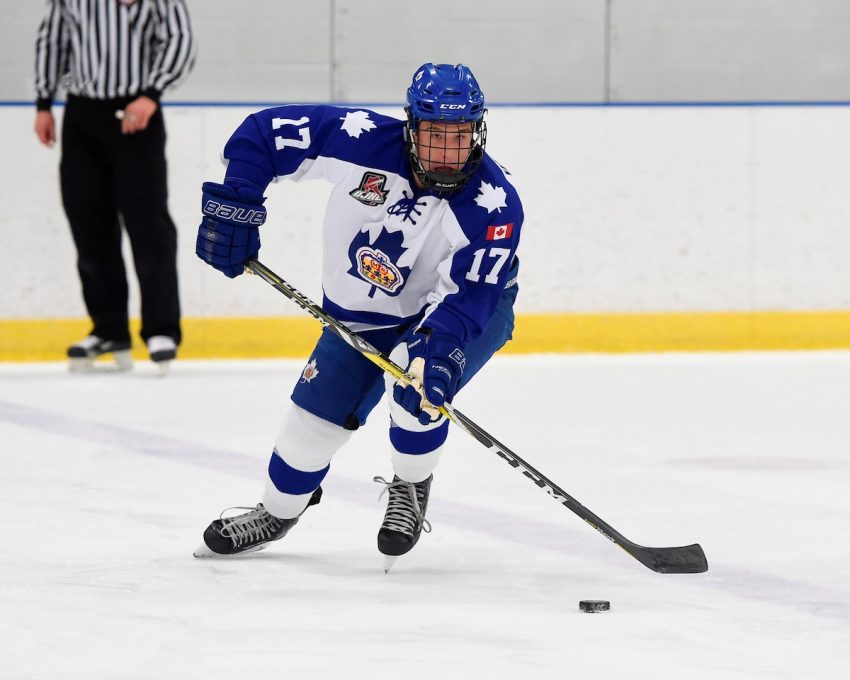 Following their success this past year, the Ontario Junior Hockey League’s Markham Royals have significant momentum going into the coming season, with exciting plans on and off the ice.

The Royals were division champions in 2016-17 – the second year in a row for this achievement.  The team celebrated their second consecutive North Division title with a banner raising ceremony before the September 8 home opener against the Pickering Panthers.

“We’re thrilled with our repeat performance this past season and know we can do even better,” said Royal’s coach Michael Galati.  “There’s always room for improvement.”

Having an eye on their third consecutive division title and beyond, coach Galati’s roster is even stronger this year with the addition of Sam DeLucia of Pittsburgh, from the New Jersey Hitmen and Jaxon Rutkowski of Rome (New York) from the Rochester Monarchs.  Both teams are of the U.S. Premier Hockey League (USPHL).  The many NHL alumni from the USPHL include Ryan Callahan of the Tampa Bay Lightning, Jack Eichel of the Buffalo Sabres, and Jimmy Vesey of the New York Rangers.

Delucia scored 36 points in 42 games last year with New Jersey.  “DeLucia is a tough power forward and we’re hoping his physicality combined with his offensive talent will help out our offence,” said Galati.  The coach is also planning new defensive pairings. “We have confidence in Rutkowski’s two-way defensive style of play and he’ll help strengthen our blue-line.”

Movement within the Canadian Junior Hockey League (CJHL) also took place during the summer.  Young Markham hockey players will be particularly fascinated to know that the Royals acquired Markham native and right-winger Zach Sheedy from the Carlton Canadians.  “We see great potential in Sheedy and young local fans will appreciate the road he’s taken to get to the Royals,” added Galati.

The Royals’ busy schedule includes 26 home games and 26 away games.  Notably, the team will be competing for the newly minted Brant Snow Memorial Trophy introduced in early September by the OJHL. The award will be given to each year to the OJHL’s Regular Season Champions in honour of the late Brant Snow, a long-time serving Governor in the OJHL.  The regular season ends on Saturday, February 24, 2018.  The 2017-18 OJHL Playoffs then begin on February 28.  The 2018 Dudley-Hewitt Cup, Central Canadian Junior ‘A’ Championship will be hosted by the Dryden Ice Dogs (SIJHL) in Dryden during May 1-5, 2018.  The year ending 2018 RBC Cup, National Junior ‘A’ Championship will be hosted by the Chilliwack Chiefs (BCHL) in Chilliwack, BC from May 12-20, 2018.

On October 27, the Royals will host “Pink in the Rink”.  This will be a home game against the Stouffville Spirit.  A pre-game ceremony will be followed by the always thrilling Chuck-a-Puck contest, a 50-50 draw and other fun activities to benefit breast cancer research through the Canadian Breast Cancer Foundation.  The players are looking forward to the Breakfast with Santa in December and details of that will be announced soon.

Tickets details for Royal’s games can be found at https://pointstreaksites.com/view/mroyals/tickets-1 and purchased at the Centennial Community Centre arena.