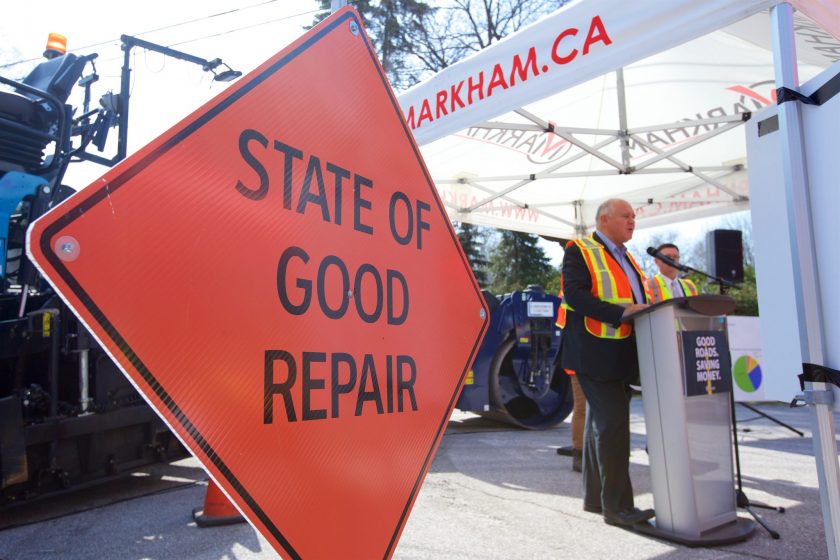 With so much talk about cannabis these days, Markham residents can be forgiven if they thought Mayor Frank Scarpitti recently announced marijuana dispensary locations in the city. Then what’s all the hype about?

The good news is the announcement was actually about city efficiency and saving taxpayers money. With merely Steeles Avenue dividing York Region from the City of Toronto, it turns out that potholes have become a new way of measuring the effectiveness of a municipal administration and the two cities are apparently worlds apart. It’s been a busy year already for Markham staff.

“A pothole on the road can be dangerous for someone on a bike and on a narrow wheel,” said Jamie Stuckless, Share the Road Cycling Association executive director.

“We’re always looking for the new way, the better way, and the more cost-effective way to deliver excellent services to our community,” Scarpitti noted.

Markham has developed what it describes as a sustainable approach to pavement management. The city is dedicated to incorporating sustainability into its pavement engineering operations by providing cost effective, environmentally friendly and socially acceptable solutions for rehabilitating its streets.

That includes fixing potholes and micro-surfacing.

Micro-surfacing, the technique of applying a thin layer for maintenance on qualified roads which don’t need the conventional replacement method, is becoming more common across North America and Europe and has been a major component of Markham’s approach. Containing special additives, micro-surfacing sets quickly and can be applied in a wide range of temperatures and weather conditions. Commonly, the surface is ready to accept traffic in about an hour.

Scarpitti acknowledged that potholes can be a way to assess the efficiency of a municipal administration.

“You’ll see more of them when you don’t invest in roads,” he said. “When municipalities let things go, the base of the road gets eroded. Too many cities in Canada, certainly in North America, have turned their back on reinvesting and ensuring we have a good state of repair in our communities. And the City of Markham has not turned its back. In fact, we’ve been focused on that and our financial wherewithal is at the cornerstone of that.”

Scarpitti is very proud of what Markham has achieved. However, it’s to be seen whether Prime Minister Justin Trudeau swings into Markham for a pothole repair selfie.