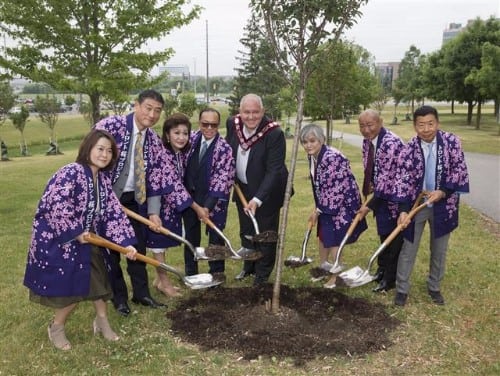 In honour of the 90th anniversary of diplomatic relations between Canada and Japan, the City of Markham has planted 80 Japanese Sakura trees, making it the Greater Toronto Area’s newest destination for cherry blossoms.

“The trees planted here represent the desire of all of the people involved that the fruitful friendship between Japan and Canada is always remembered here in Markham,” says Takako Ito, Consul-General of Japan, adding, “Our relations with the city will continue to grow and flourish, and the Sakura blossoms will symbolize the strong friendship between Japan and the City of Markham.”

The trees were donated through the Trees for Tomorrow program and from various Japanese donors. Fifteen trees were planted at Milne Dam Conservation Park, 40 at Rougeside Promenade (20 on each side of the new bridge) and 25 at the Markham Civic Centre as part of the new gateway path, for residents to enjoy. 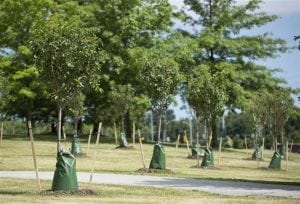 “The City of Markham’s friendship with Japan goes back 30 years when the first Japanese companies began to invest in Markham,” says Mayor Frank Scarpitti. “I was honoured to lead a business delegation to Japan last fall, which sparked this partnership between the City of Markham and the Consulate General of Japan in Toronto.

“Visitors from Ontario and beyond can now appreciate the splendour of the Japanese Sakura cherry blossom trees, which celebrate Markham’s abiding friendship with Japan.”

Sakura is an important symbolic flower in Japanese culture. In Ontario, Sakura typically blooms delicate pink or white flowers in late April or early May, lasting anywhere from four to 10 days, depending on the weather.

Japan is Markham’s second largest source of foreign direct investment. The city is home to 20 Japanese businesses that, together, employ 3,400 people. Those companies include Honda Canada, Shiseido Canada Inc., Weins Canada and Toshiba of Canada Ltd.