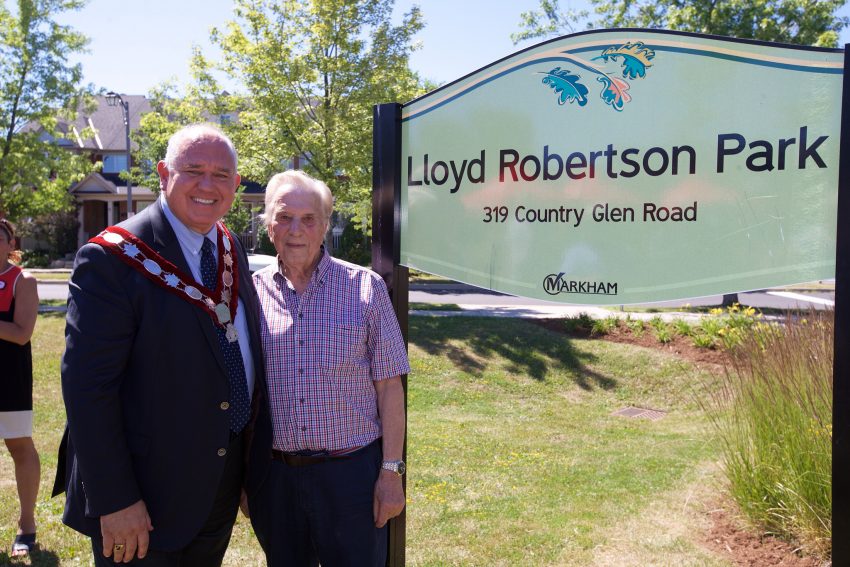 A Markham park, named in honour of Canadian news icon Lloyd Robertson, is now open. The park is located at 319 Country Glen Rd.

“This is a great piece of legacy because it’s so different,” the legendary broadcaster told CTV news at the July 7 opening. “It’s tangible. You can reach out and touch it, you can come and sit here, your kids can play in the park. It’s fabulous.”

“This park is a place of sanctuary, a place to reflect and, just like Lloyd did for Canadians over many years, spending time here is a chance to gain some perspective and build on our strong sense of community,” Mayor Frank Scarpitti said. “Let’s honour the boy from Stratford who grew up to be the most trusted voice in Canada.”

Robertson began his broadcasting career in 1952 at a radio station in Stratford before working in Guelph, Windsor, Winnipeg and Ottawa. He was anchor of The National on CBC before joining CTV in 1976, where he was promoted to chief anchor and senior editor in 1983, a position he held until vacating his anchor chair in 2011.

In 2007, Robertson was the first journalist inducted into Canada’s Walk of Fame. In Markham, he has hosted some of the city’s biggest events, including Markham’s annual Santa Claus Parade and its dedication of Veterans Square and Cenotaph.

Photo: The official opening of Lloyd Robertson Park was celebrated on July 7. City of Markham photo.