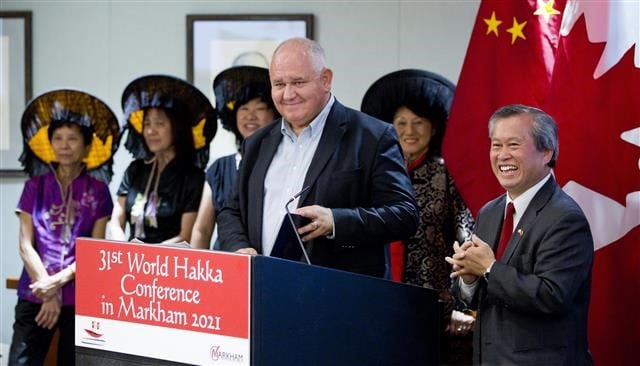 The City of Markham and the Hakka Canadian Association recently announced a successful bid to host the 31st World Hakka Conference in October 2021.

“This marks a first in Canada and the first time in 30 years this prestigious conference has been held in North America,” says Mayor Frank Scarpitti. “Hosting this global conference will bring significant social, cultural and economic benefit to our city and our region, reinforcing our position as a global community and further strengthening our ties as global citizens.”

On Sept. 11, last year, Markham Council voted to support the Hakka Canadian Association in the bidding for hosting rights for the conference. The strong support provided by the city was essential to the association winning the bid. With a Hakka population of more than 15,000, Markham is expected to host 3,000 delegates from more than 20 countries including, China, Hong Kong, India, Singapore, Malaysia, Australia, Mauritius, United States, United Kingdom, France, Trinidad, Jamaica and Brazil.

The conference will be held over four days, providing an opportunity for Markham to showcase the city’s diversity and generate substantial economic benefits for the community.

“I am incredibly humbled that the City of Markham was chosen to host the 2021 World Hakka Conference,” says Regional Councillor and Hakka Canadian Association chair, Joe Li. “Not only will this allow Hakka leaders from around the world to connect and strengthen cultural ties, the conference will also garner international exposure of the Hakka culture, bring communities together, strengthen economic ties and further promote Markham’s focus on diversity and inclusion.”

As a Hakka himself, from India, Li has supported this initiative to unite Hakka cities to foster economic and cultural ties through commonality and connections.

The Hakkas (directly translated to “guest families”) are an ethnic group of “Han” Chinese considered to be one of the earliest settlers near the Yellow River in China. In a series of migrations over time, the Hakkas have dispersed to many countries around the world and are esteemed for their cohesion, inclusion and distinct socio-cultural characteristics.

Photo: Mayor Frank Scarpitti and Regional Councillor Joe Li are joined by members of the Hakka Canadian community to announce Markham will host the 31st World Hakka Conference in 2021.