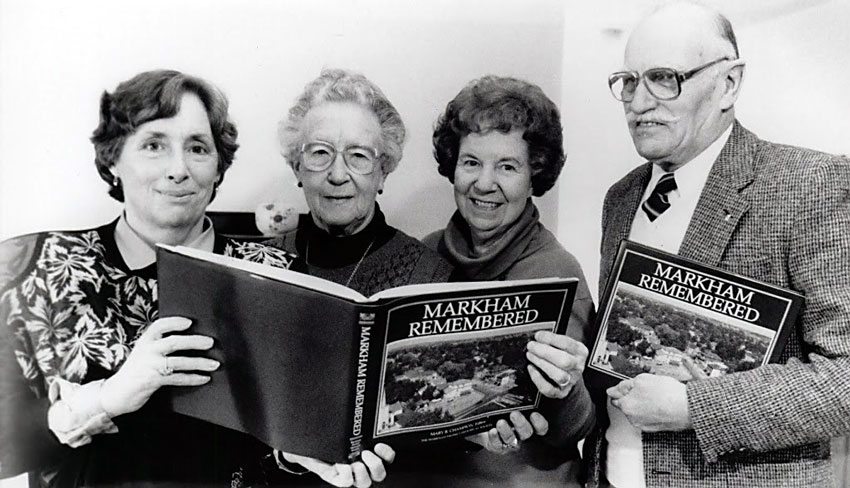 The City of Markham and Markham Museum recently celebrated Mary and Isabel Champion, founding members of the History of Markham committee, by dedicating the Champion Research Centre, an archival research facility to honour the two women and their great impact on the city’s history.

As editors, Mary and Isabel worked tirelessly to make the first two Markham history books a reality. While conducting their research, they incorporated a catalogue system that set the stage for the archive repository that is still used by Markham Museum today.

“Isabel and Mary Champion shared a passion for history,” says Mayor Frank Scarpitti. “They worked tirelessly, their groundwork helped set the stage for where the Markham Museum is today, a well-respected, nationally-recognized museum. Sharing Markham’s history in meticulous detail is not an easy feat and we thank them for their dedication and commitment. The research centre is a place for access to the archives and naming it after the Champion’s is the perfect choice.”

Markham Museum is highly regarded by local and national standards, largely in part to the groundwork done by the Champions. They set an example by conducting professional, ethically-based research and written work by maintaining the data collected to Museum standards

Markham Museum exceeds the provincial standards for museums and meets criteria for federal funding due to a high quality of collection care, exhibit design and program design. The Champions represent all that the facility stands for: academic integrity, community engagement and respect for material culture, which includes the museum’s valuable archival holdings.

“Fact-based research and the preservation of history were a passion that my aunt and mother shared,” says Mark Champion, son of Mary Champion. “Having the research centre named for them is a great honour and I can think of no part of the museum that they would be more pleased to be associated with.”

Not only were they dedicated to the preservation of Markham’s rich and culturally diverse history, the Champions also owned farms on what is now downtown Markham and the Markham Civic Centre. Several pieces in the museum collection, including a tractor, were donated by the Champion family.