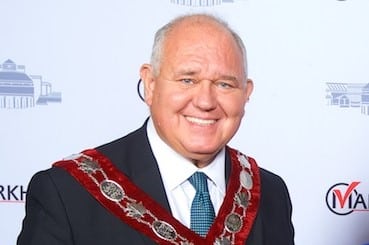 Markham Mayor Frank Scarpitti expressed his satisfaction with how Premier Doug Ford consulted with municipalities in regard to the Yonge subway extension.

“I applaud Premier Ford for consulting with municipalities and for committing to build the Yonge subway extension,” said Scarpitti. “I support the uploading proposal if it means we will finally get shovels in the ground for this critical transit project.”

Scarpitti recently conveyed his support during a meeting with Monte McNaughton, infrastructure minister at Queen’s Park.

“My support comes with conditions,” said Scarpitti, who serves as York Region Transit Corporation chair. “Delays caused by never-ending jurisdictional issues must stop, we have to set aside any political boundaries and work together using evidence-based planning. I have supported other transit investments in the GTA, including the relief line. If uploading means we will advance the Yonge subway extension, then I will continue to beat the drum and advocate for funding. It’s time to stop talking and start building.”

According to a Metrolinx Report, Relief Line and Yonge Subway Extension (2017), both the downtown relief line and the Yonge subway extension are priority projects. Both are needed to meet GTHA’s growth to 2031. The Yonge extension would generate more access, while the relief line would create more capacity.

“To say the Yonge subway extension will cause overcrowding is like saying we don’t need to build or widen roads to deal with growth and congestion,” added Scarpitti. “New transit improvements such as automatic train control, increased train service, regional express rail and SmartTrack, will all create additional capacity and reduce overcrowding.”

Ford has committed to creating a regional transportation system and proposed to upload the responsibility for building and maintaining new and existing subway lines to the province, while the Toronto Transit Commission would continue to operate the subway system.

The five-stop extension to Highway 7 will virtually eliminate 2,500 daily bus trips along the busy Yonge Street corridor. With more than 50,000 businesses and 600,000 jobs, York Region is the second largest employment zone in Ontario. More than 150,000 people commute to work in York Region every day. The region is Canada’s fastest-growing large municipality and is home to nearly 1.2 million people; expected to reach 1.8 million by 2041.