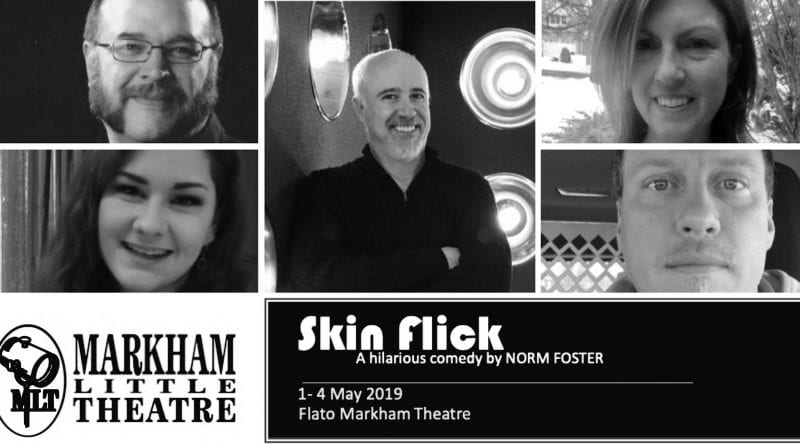 Just in time for spring to have sprung, Markham Little Theatre (MLT) brings some heat to the stage with their final show of the current season. Skin Flick, which means exactly what it sounds like, is a play by the Canadian legend Norm Foster. It promises a unique story, lots of laughs and even some naughty fun when it opens on May 1.

“The characters are everyday people in a typical situation,” says the show’s director, Nicky Marsh. “The only difference is they choose and insane solution to fix their problem.”

Truthfully, knowing the play is written by Foster should assuage any potential audience member’s fears the play would ever drift toward inappropriate. Instead, you can be guaranteed that you’ll have ordinary characters stuck in unusual situations, facing moments of truth and showing lots of heart.

”The subject matter may seem a little taboo to some,” explains Marsh. “But at the core of this play is a zany bunch of individuals at different stages of their lives who try to make it through, one day at a time.”

“The play is more about love and relationships than it is about making an X-rated movie,” says Marsh.

The show is rounded out by a kooky failed actress named Jill and mild-mannered bookie Byron, who join the couple in executing their unlikely plan. Of course, along the way, deep lessons are learned about love, life and getting by.

Like all of MLT’s productions, Skin Flick relies on the talents of local creators. Marsh is debuting as the show’s director after appearing onstage for a few years, including memorable turns in Calendar Girls, Perfect Wedding and Arsenic and Old Lace. The show’s cast of five features three MLT veterans and two newcomers.

“Each of the actors will bring a slightly different take, as some of their own personality and experiences creeps into the role,” says Marsh.

The would-be entrepreneur couple is played by MLT veterans Randy Kirsh and Beverly Sortropa. Dave Kouhi makes his first appearance with the company as the cameraman best friend, Alex. Alanna Stewart also joins the company for the first time as Jill, while Tristan Stansfield returns to MLT as Byron.

“It’s only once the actors get into rehearsals that you see what works,” explains Marsh. “This collaboration is what I’m looking forward to the most.”

As Skin Flick is the last show of a 2018/19 season that has seen a range of shows from dramatic to nearly farcical, the company intends to finish on a high note. They see it as a chance to showcase its commitment to producing quality theatre and local talent, while hopefully inspiring the audience to join them again next season.