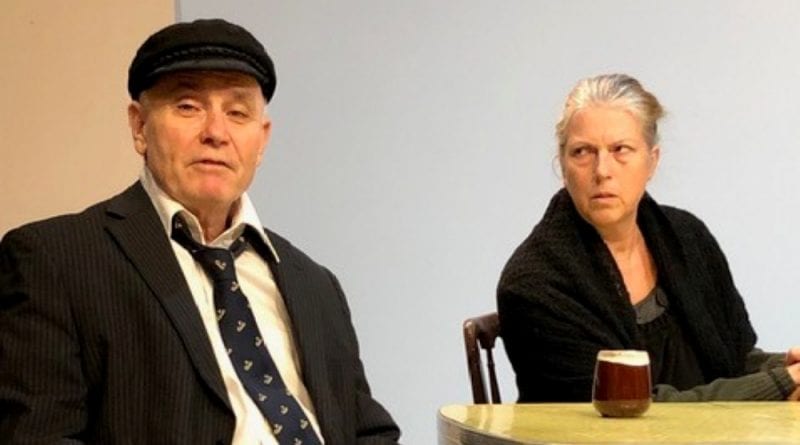 One could be forgiven for thinking renowned writer John Patrick Shanley was Italian, despite his name. He’s from the Bronx.

His oscar-winning 1988 screenplay for Moonstruck feels as true to life as any telling of the Italian-American experience. And his stage plays Danny and the Deep Blue Sea, and Italian American Reconciliation takes an even more in-depth look at the Italian side of New York City.

Along comes his acclaimed 2014 play Outside Mullingar, a play about the last chance for love set in rural Ireland. It’s a recreation from inherited memory of a farm like the one where his father grew up. Shanley is actually, and quite obviously, Irish-American.

“It is the love story between Patrick Shanley and Ireland,” show director Marlene Foran says. “Although Shanley’s home life was steeped in Irish culture, he never wanted to be limited to being known as an Irish writer, so he avoided the topic of Ireland altogether. He believes he had to let it mature inside him.”

In many ways, this is why it’s considered one of Shanley’s best in a career of great scripts. Markham Little Theatre (MLT) has likely chosen to close its 2019/20 season with Outside Mullingar this April, not because of its Irish roots but because of its universal themes.

“It deals with the human condition and the pursuit of happiness, which everyone can relate to,” Foran says. “Who doesn’t like a good love story?”

The play is set in a rural kitchen that stands for the side-by-side farms of the Rileys and Muldoons. Anthony Riley lives with his widowed father Tony, and Rosemary Muldoon with her recently widowed mother Aoife. Anthony and Rosemary have lived their entire lives on these adjacent farms. She has been stubbornly in love with him since childhood, but he has always seemed oblivious to her feelings.

“Shanley writes about things we can all relate to: love, family, the inevitability of change and the fear that can generate,” explains Foran. “All of the characters experience a sort of emotional paralysis. They fear change but know they cannot continue to exist in what has always been because change has caught up to them.”

Romantic dramas about later-in-life-love are often nostalgic, convenient, and slightly hard to believe. Somehow setting the story in the Midlands of Ireland adds a darker element that gives the script a far more realistic perspective on a love that can be as desperate as it is true. It also allows for a fair helping of black humour too.

To bring this mix of truth and humour to the stage the company has called on a team of veteran Markham Little Theatre performers. Nicky Marsh, who plays Rosemary Muldoon, was in MLT’s productions of Dixie Swim Club, Calendar Girls, Jitters and directed Skin Flick. Cam Lund, who plays Anthony Reilly, was with her in Calendar Girls and Jitters. The cast is rounded out by Beverly Sotropa playing Aoife Muldoon and Carl Gambacort playing Tony Reilly; both also with several MLT credits to their name.

“This is a great cast,” stage manager Judy Atherton says. “They are all returning MLT actors who our audience has enjoyed in the past and are bringing so much experience to our stage.”

The same can easily be said about director Foran and Atherton herself, each also MLT stalwarts at this point.

“The cast are adept at both comedy and drama and have a depth and range to their work, which is definitely a requirement in this show,” Foran says. “They all care deeply about theatre, of course, but also about people and principle.”

Even though Outside Mullingar is rooted in the past, it is very much about present change. It’s about learning one’s own legacy and trying to make the dream of love real.

“I hope the audience will leave with the feeling they have gone on a journey with the characters to some deeper understanding of life and love,” adds Foran.

Outside Mullingar runs at The Flato Markham Theatre from April 29 to May 2.

Photo:  Carl Gambacort and Beverly Sotropa in rehearsal for Outside Mullingar.