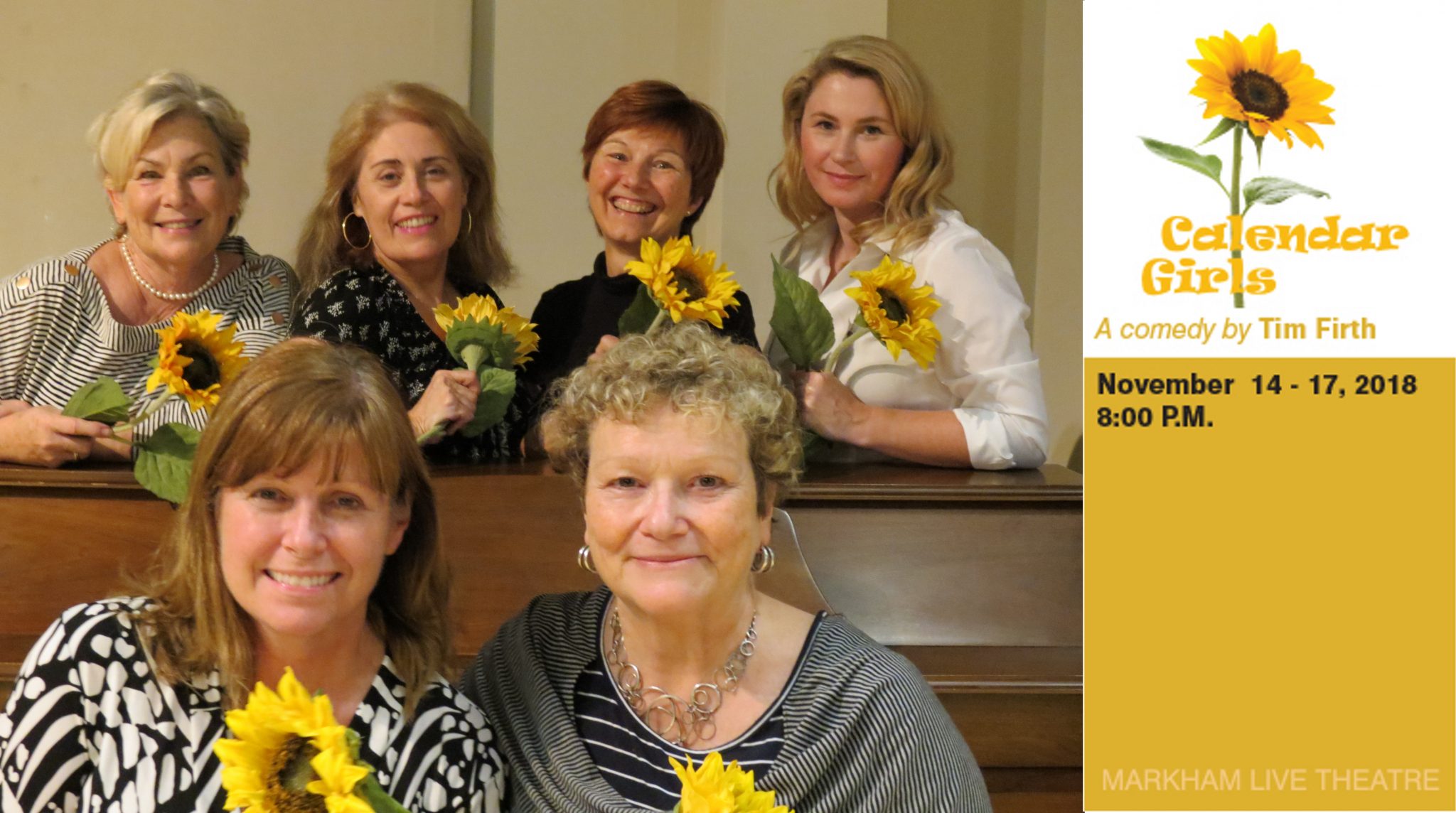 As long as Hollywood has been making movies, filmmakers have looked to the centuries-long history of theatre for inspiration. Plays, from Shakespeare right up to Tennessee Williams and David Mamet, have been adapted for the screen countless times. More recently, theatre artists have begun to adapt filmed work for the stage.

It’s the origin of the Markham Little Theatre (MLT) second show of the season, Calendar Girls. It runs at the Flato Markham Theatre from Nov. 14-17.

“The film was lovely, but people who have seen the movie will find it quite different from the play,” says Gloria Thomas, the show’s director. “If you’ve seen the movie, you can expect to find something new and exciting in the story when you see us on stage.”

“Live theatre affords the cast and crew a chance to create a magical moment on stage for our patrons,” adds producer Angela Stewart. “The audience becomes a part of the production, fuelling the actors and their energy.”

Calendar Girls will benefit from that energy too. The story finds a new widow, Annie, and her friend Chris setting out to raise money to buy a new couch for the waiting room at the hospital where her husband died. Their idea is devilish, as they convince a dozen or so of their friends to pose nude in a calendar to sell in the community.

“This beautiful play is based on the true-life story of a group of Yorkshire women who produced a nude calendar in order to raise money for cancer research,” says stage manager Sarah MacDonald. “We’ve received nothing but positive reactions from our subscribers when they learn that it’s on this season’s lineup.”

For Markham Little Theatre, the Calendar Girls cast is quite large and just one of the many challenges for director Thomas. The play takes place over a year and requires many costume changes as well as clever staging to keep everything making perfect sense.

“We are a closely knit group of people who are having a great time during rehearsals,” says Thomas. “There’s a lot of laughter and a lot of support.”

The two leading ladies are played by Kerry Harmon and Marlene Foran. Foran takes on the role of the widow while Harmon handles the adventurous friend who hatches the whole idea. The rest of the main roles, or Calendar Girls, are played by Penney Donovan, Nicky Marsh, Anne-Maria Hurle and Michèle Brown. Between these actors and the eight who round out the cast, there will be many familiar faces for MLT audiences.

“There are fourteen actors,” says McDonald. “This means that some of our members, who might not normally act in our plays, get their moment in the spotlight.”

After their, now traditional, season-opening production at their studio space near the Markham Museum, MLT is happy to be back on the stage at the Flato.

“Being at Flato Markham Theatre allows us to provide our patrons with a larger show,” says Stewart. “The up-to-date technology lets us play with light and sound on an advanced level and their technical staff are always helpful and supportive.”

This show is about as large as it gets for this stalwart company. No matter how big or challenging the production gets however, the people behind the scenes remain focused on the audience experience.

“This is a production that will leave audiences laughing and marvelling at the strength of the human spirit,” says Thomas. “It is a beautiful testament to friendship and proof of the power we hold when we face our fears with courage, humour and optimism.