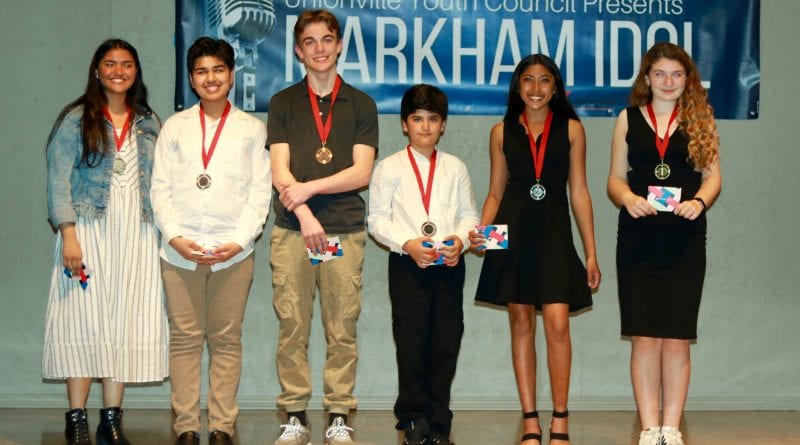 Back for its 13th year, Markham Idol highlighted the talents of young local singers in the annual event.

The singing competition took place on May 31 and had over 50 auditions this year, which, according to Markham Idol Co-coordinator Calen Knakowski, is the most auditions they’ve ever had in all the years the event has been running.

After the first round of auditions, fourteen singers ages nine to 17 were selected to perform in the final show at Rouge River Community Centre.

“I’m really shocked right now,” said Khatri, first place senior winner. “I didn’t think I was going to place. Everyone was really talented and it was amazing watching all of them. I grew up listening to all the greats – Aretha Franklin, Whitney Houston, Mariah Carey – they just influenced me and helped train myself to sing.”

This year, all proceeds earned from Markham Idol will go towards the P.A.R.T.Y. Program. P.A.R.T.Y. stands for Prevent Alcohol and Risk-Related Trauma in Youth and the program’s goal is to raise awareness about youth alcoholism and prevent risks related to alcohol and drug abuse.

“We’re very big on doing things for youth,” said Karma Sadhwani, co-coordinator of Markham Idol. “We chose a charity like this because we want to give back to youth. That’s our goal.”

Markham Idol is organized every year by the Unionville Youth Council, which is a group of local youth who look to create change in the community by taking on various initiatives during the year that range from fundraising events to awareness campaigns.

To learn more about the Unionville Youth Council and its initiatives throughout the year, visit www.unionvilleyouthcouncil.org.