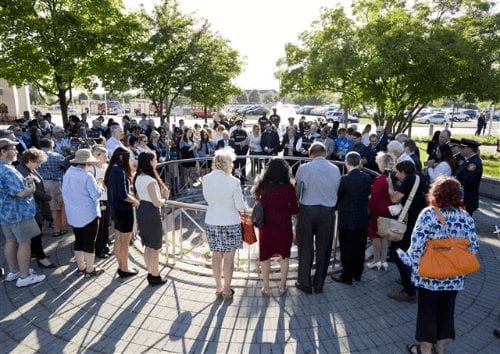 Markham Mayor Frank Scarpitti, members of council, and Pflag Canada York Region hosted a vigil in support of the LGBTQ victims of the Orlando Pulse nightclub shooting. Over 200 people gathered at the Markham Civic Centre for the ceremony held on June 14.

Members of York Pride Fest, York Regional Police, City of Markham staff and York Region municipal officials and residents participated in a vigil and signed a wall of remembrance to pay tribute to the victims. The event was followed by a Pride flag raising ceremony to recognize Pride Week in York Region and support freedom in gender identity and sexual orientation in the Markham community. The Pride flag remained at half mast for the duration of York Pride Week.

“Today we are here to remember the victims of this tragedy and to show support for the LGBTQ community who endured a terrible attack on their innocent brothers, sisters, families and friends,” said City of Markham Mayor Frank Scarpitti. “The people of Markham, come from many backgrounds, cultures and religions – and we will continue to stand together to welcome and celebrate each other’s differences.”

Sunday’s tragedy in Orlando is a reminder of the continuing need to engage and foster a greater understanding of inclusivity, equality and diversity in our community and beyond. Markham’s Diversity Action Plan, Everyone Welcome, confirms the City’s commitment to, and the value of, a welcoming and inclusive community. City Council and staff have taken many steps to engage Markham’s diverse community, and to foster a greater understanding of diversity. The City of Markham will continue to encourage, celebrate and value the contributions of everyone from all ages, backgrounds and abilities.

“Pflag Canada York Region was honored to stand proud with the community of York Region in solidarity and remembrance for our LGBTQ family whom lost their lives in the Orlando,” said Amanda Knegje, President, Pflag Canada York Region. “The vigil and flag raising are reminders that we cannot let these acts define us or destroy us. They will drive us forward and strengthen our determination to continue to fight for love, the safety of the LGBTQ community, and freedom in gender identity and sexual orientation.”

For more information on the services and support for the LGBTQ community in York Region, please visit Pflag Canada York Region

Photo: Vigil participants gather around Markham’s Peace Garden and Eternal Flame to observe a moment of silence for all those who lost their lives in Orlando and in support of their families and friends.