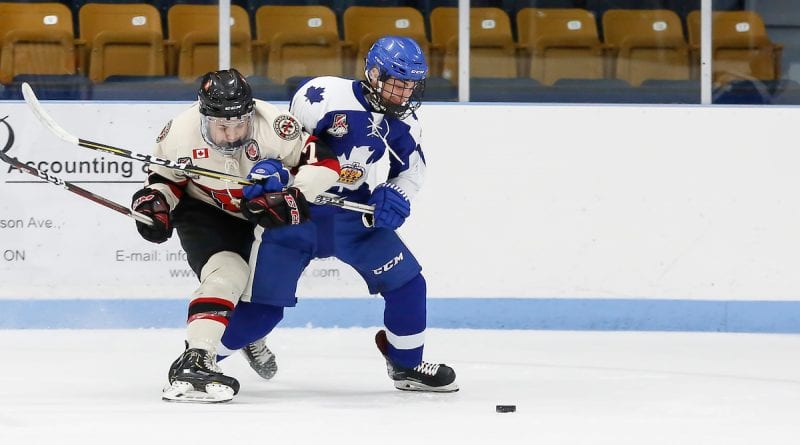 The Markham Royals are ready for round 2. On March 15, the Royals will begin the North-West semifinals, at home, at the Markham Centennial Centre against the Newmarket Hurricanes.

Markham, North Division winners, knocked off the Georgetown Raiders in six games in their opening round. The series saw the home team win the first five games before the Royals, on the strength of a Devyn Mayea double overtime power-play goal, defeat the Raiders 5-4 at Georgetown last weekend. Newmarket, meanwhile, has been resting for a week after eliminating the Aurora Tigers in five games.

During the regular season, the Royals had Newmarket’s number, posting a 5-1-1 record against the Hurricanes. The winner of the series will advance to the North-West conference final against either the Oakville Blades or the Buffalo Jr. Sabres.

Photo: Nick Giunta (Markham) and Austin D’Orazio (Newmarket) will renew hostilities on Friday night, as the Royals and Hurricanes are set to battle in the North-West Conference semifinals. Ray MacAloney photo